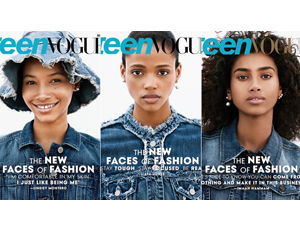 Black models Imaan Hammam, Aya Jones, and Lineisy Montero graced the August issue of the Teen Vogue cover and rocked it for black girls around the world.

The three young, up-and-coming women of color had already tasted a bit of success prior to the big shoot–gaining attention on fashion week runways, walking for grand designers like Givenchy and Prada– but after being featured on the cover of Teen Vogue, the three became a symbol for the media’s acknowledgment of black beauty.

In case you aren’t familiar with the girls and their journeys, take a moment to check them out below.

Imaan Hammam is of Egyptian-Morracan ethnicity and, according to Teen Vogue, has already landed a career-defining Givenchy campaign and her first Vogue cover. She is also a self-described sneakerhead who speaks three languages and grew up in Amsterdam. From the looks of the interview, Hammam is also unapologetically proud for her race and understands what it means to bring diversity to the fashion industry.

“Sometimes people call me Middle Eastern and I’m like, ‘No, I’m black.’ I am proud of my culture, proud of who made me, proud to be here.”

Aya Jones grew up in Paris and was discovered there. Before landing the cover of Teen Vogue, Prada previously booked Aya, exclusively, to walk in the Spring/Summer 2015 show during Milan Fashion Week, according to Yahoo. As if that wasn’t impressive enough, Jones has walked in a total of 47 runway shows, but she is far from your typical super model. She makes a point during her Teen Vogue interview to combat industry stereotypes.

“I don’t like when I see really arrogant or pretentious models. I’m friendly. I say hello to everybody,” she told the magazine. “You see fake relationships between girls, but I’ve found good friends. They trust me, and I trust them. I’m sure about who they are. It’s not superficial.”

Last, but not least, there’s 19-year-old Lineisy Montero, hailing from the Dominican Republic. Â She’s fairly new to the stage and, according to the mag, Lineisy went from sitting with her close-knit family in Santa Domingo, to walking in a Prada runway show. Modestly, Montero recalls the moments after her big show to Teen Vogue.

“Immediately after the show, my agent showed me a picture that had gone viral. I was thinking, I guess if my photo is everywhere, I did something right.”

Despite the long hours and language barriers, the girls seemed to have no trouble getting along on set. Check out the video below where they offer a glimpse into their 15-year-old selves.