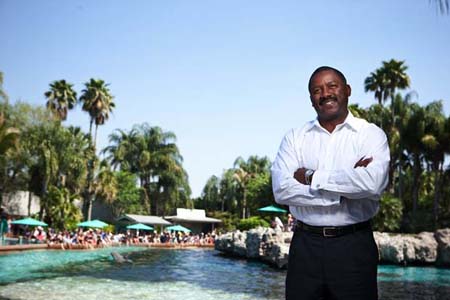 When Terry Prather says, “The show must go on,â€ he’s not reciting an overused clichÃ©, he’s enforcing a mandate. Since his appointment in October 2010 as president of Sea World Parks & Entertainment’s largest trio of parks (Sea World Orlando, Discovery Cove, and Aquatica), he has had to focus on maintaining an entertainment standard for 6 million guests annually in the midst of a tumultuous business environment:

Last year, SeaWorld Parks & Entertainment company, which operates 10 theme parks in five states, was acquired by private equity firm The Blackstone Group for slightly more than $2 billion. Efforts to right-size, including hundreds of layoffs, came at the close of a year marked by the tragic death of a SeaWorld Orlando whale trainer as well as the negative publicity, dip in sales, and attendance that followed.

In charge of long-range planning, daily operations, and conservation initiatives of the world’s most popular marine life park, Prather, 56, is known for his calm, steady hand in this high-risk industry. Life experiences have groomed him to handle the unexpected. Prather became a father at 18, dropped out of Morehouse College at that same age, married at 19, and by age 28, was a divorced single dad traveling so steadily in pursuit of construction work that his son thought La Quinta Inn was home.

In 1986, Prather became a foreman on the construction site for SeaWorld in San Antonio. Eager to settle down with his children, in 1988 he accepted a position as the park’s manager of water quality. Twelve years later, Prather became the first African American to run a major theme park and remains the only industry executive of any race who can say he literally built his career from the ground up. Prather talks with black enterprise about his journey and what it’s taught him about business.

What experiences helped prepare you for dealing with all that’s happened in such a calm, measured way?
Back in the ’80s, SeaWorld San Antonio opened under some challenging conditions. We had to make a lot of very difficult decisions about the operation and about staffing. I left there and opened Jazzland USA in New Orleans and it went through bankruptcy. Six Flags purchased that park and kept me on, and we got things on track. Then this storm came through called Katrina. That site is like a ghost town now. As I’ve gone through these things, I’ve always told my team, “The sun will come up tomorrow. Let’s just do what we can do, control the things we can control, and don’t stress, because you can’t get things done when you get stressed out.â€

Still, there are so many things that can go terribly wrong at a theme park each day. What keeps you up at night?
Running a park is all about managing risks and you’re managing a lot of issues simultaneously. Sort of like a juggler that learns how to juggle 15 balls versus two balls, once you get to that level, you get comfortable with it. But if there’s anything I still have anxiety about, it’s safety. Years ago, when I was in maintenance, I used to tell the team, “My kids might be on that ride, so it had better be right.â€ Now it’s my grandkids, and our guests and their kids, and it better be right every time.

What’s the greatest lesson you’ve learned in business?
If something bad happens it won’t get better in time. Nothing just ever blows over. You have to work hard at fixing things.

Has having been a single parent affected your management style?
I think I honed my work ethic as a single parent, and my knack for being organized. I had to schedule every detail from the time my kids woke up until I picked them up from daycare at night. Nothing about it was easy, and raising a daughter alone was the most challenging thing I’ve done. But I learned that commitment is more important than anything. They depended on me for everything, and I could not let them down.

What do you most value in your direct reports?
I talk about the three Cs all the time: consistency, commitment, and confidence, [but] trust is the thing that matters most to me. I work with marine biologists, animal trainers, conservationists, nutritionists, Ph.D.s, and experts of all kinds all the time. I tell them, ‘I don’t try to know everything, so I need to know that I can trust you to know what you need to know.’ That’s especially true with my direct reports. I had a frank conversation with my head of marketing years ago, where I told him, ‘You’re one of the best marketers I’ve ever worked with, but on a scale of one to 10, I trust you at a three. If you’re going to be successful, you need to build that up.’

There aren’t any other African Americans who do what you do.
We have not made a lot of progress in bringing minorities into leadership roles in this industry. It’s two sided. The perception in our community is that this is seasonal, minimum wage work, and we haven’t communicated enough that this is a real area of opportunity. The same is true with visitors. We go to thrill parks but the perception of marine life theme parks in our community is off. We are conducting research about how to hit that mark. It’s a delicate balance of messaging, marketing, and pricing and even when you address all of that, it’s a challenge. But we keep trying.