Is Thursday the New Black Friday? 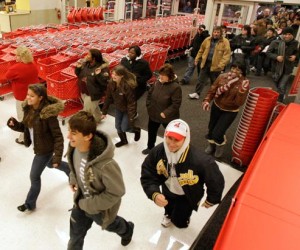 The days of big crowds huddled in parking lots in the early hours for stores to open on Black Friday may be over. More retailers are moving their big sales and price drops to Thanksgiving Day, a move that’s garnering mixed reaction from shoppers and employees alike.

Target announced that it’s opening on Thanksgiving Day at 9 p.m for it’s Black Friday sale, technically making it a “Black Thursdayâ€ sale. Wal-Mart’s also opening its doors at 8 p.m. Macy’s, Kohl’s and Best Buy all plan to open at midnight.

“CEOs are saying that shoppers want to start shopping earlier and get to bed earlier,â€ said Michael Brim, founder of Bfads.net, a popular website that leaks Black Friday advertisements. “They say customers would rather have evening sales and be able to get to bed by 2 or 3 in the morning. But there’s a question as to how much earlier they can open stores without cutting in Thanksgiving dinner.â€ Brim said some shoppers are skipping Thanksgiving dinner to line up early and take advantage of sales. Earlier hours will just encourage more people to skip the holiday, he said.

Some employees and their families have also expressed frustration with the earlier store openings. Jennifer Ann, of Vernon Hills, Ill., started an online petition so that her younger brother, a part-time Target employee could spend Thanksgiving with the family.

“Last year he had to leave early, and this year he won’t be able to make it at all,â€ she said.

A spokeswoman for Target said the 9 p.m. opening time was “carefully evaluatedâ€ and that “team member preferences were considered in creating our store staffing schedules.â€

Change.org is hosting about 40 similar petitions against other retailers, including Best Buy, Sears and Toys “R” Us.

“I just hope next year thisÂ doesn’tÂ occur,â€ said Jennifer Ann. “I hope retailers take a look at this. Every year this gets worst. People want to spend Thanksgiving with their families. Next year, I hope theyÂ revertÂ to the way things were when Black Friday was on Fridayâ€