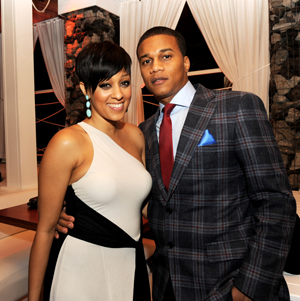 Many working women ponder how to live the #GoodLife, fearful that they may never learn to efficiently balance the elite titles of businesswoman, wife, and mother, all at once. But serial entrepreneur and actress Tia Mowry-Hardrict strongly believes there’s an abundance of success on the other side of those sometimes daunting fears.

Mowry-Hardrict, who recently landed a new spot on the Cooking Channel, preparing and sharing healthy recipes from her home, says the key to having it all comes with forgiveness.

The 36-year-old, hardworking “instant mom,â€ says a woman’s need to successfully maintain a healthy work/life balance is exactly what drove her to embark upon the cooking show venture and the many business venture’s preceding it.

“For me, business ventures always have to come from a need,â€ she says. “There are a lot of moms out there that need to be influenced and guided on how to balance it all.â€

Mowry-Hardrict manages to balance a lucrative career, a marriage, and motherhood all while maintaining an overall positive outlook on life. When BlackEnterprise.com caught up with her to talk about her latest #BossMove, she also revealed five work/life lessons she learned in an effort to help working women achieve balance.

1. The first lesson Mowry-Hardrict learned was never give up. She says no matter where the journey may take you, keeping the end in mind and persevering are key.

2. Stay focused. For the most part, Mowry-Hardrict grew up on television with the entire world watching. Having to navigate Hollywood, her family and her personal life became stressful at times, but she never lost sight of her goals and purpose.

3. Endurance is important. The starlet looks over her career, which spans more than 20 years, and remembers a major difficulty she once had to endure. “The hardest [business decision I’ve made] would have to be going out and having the business discover me as an individual,” she says. “Could I go out and do this on my own? Could I go out and create and establish myself as an individual?â€

4. The answer was yes. With time, she was able to stand alone as an actress and respected business woman, which brought her to her fourth lesson: Remain patient.

5. And lastly, Mowry-Hardrict learned to overcome fear. Mowry wants moms and entrepreneurs to know it’s okay to be afraid but warns them not to allow fear to keep them from success. “When you tackle your fears, that’s what success is,” says Mowry. “Never let fear overtake you.â€