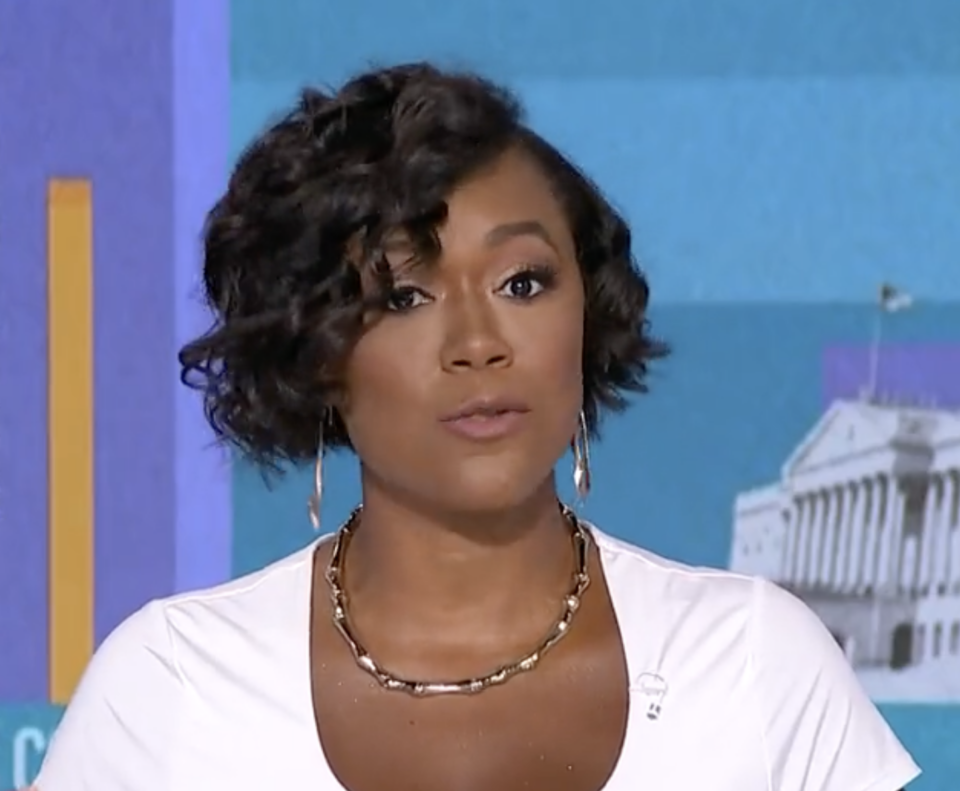 The host of the MSNBC show The Cross Connection with Tiffany Cross called out ABC’s The View for supporting white supremacy by hiring an ex-Trump staffer.

Variety announced that the former White House Director of Strategic Communications under the Trump Administration, Alyssa Farah Griffin, would be a permanent conservative co-host for next season.

Griffin was hired to replace the former conservative host and daughter of the late Sen. John McCain, Meghan McCain, and Tiffany D. Cross did not mince words during her show on July 30 when she noted The View was enabling white supremacy by hiring the former Trump staffer and writer for the far-right website WorldNetDaily. Griffin, who is also a CNN contributor, quit working for the Trump administration in December 2020.

“Let’s please not forget that this tawdry turncoat Trump loyalist quickly morphed into an opportunist after voluntarily taking jobs with the Trump administration. Signing onto his regime knowing full well what he was,” said Cross, adding that Griffin rode Trump’s “wave of open xenophobia and racism all the way to network television.”

“Okay. I have to say, watching the Jan. 6 fallout happen in real-time, I honestly sit back and shake my head in awe and frequently say out loud, ‘Y’all are a trip.’ It’s not even simply the violent insurrectionists,” she added, noting that the same pearl-clutching folks who were outraged about the attack on the Captial were not as concerned by Trump’s indifference to Black and Brown lives as well as his dangerous policies.

“I mean, did you really think that the dude that said, ‘when the looting starts, the shooting starts,’ wasn’t going to encourage violence? Because we did. We saw it.”

She went on to blame the folks responsible for Trump’s rise including those who voted for Trump, his campaign staff, lawmakers and media enablers. She also reminded the mainstream media of their previous comments noting their failure to pay attention to racist white people during Trump’s rise and warned them they were doing it again. After Cross added that Griffin admitted to sipping on Trump’s Kool-Aide every now and then, she had jokes.

“You guzzled down that Kool-Aide like it was the bleach your boss once said cured the ‘Rona,” recalled Cross.

The MSNBC host went on to note Griffin’s status as an election denier, writer for a far-right-wing website founded by her father and her defense of Trump after he finally told the Proud Boys to stand down. Cross also noted Griffin’s support for Rep. Jim Jordan and the former White House Chief of Staff Mark Meadows.

“So, as we watch these people, who think a feigned apology is accountability get rewarded with TV deals, book deals and stints with Dancing on the Stars,” she said. “It is so clear to us that many in the media are still trying to normalize these folks. And why?”

Cross also called out the media for caring about the feelings of people with “different views” rather than the truth, history and facts.