Tiger Woods Cheers Serena Williams On at U.S. Open, 'It Was A Privilege to Watch Greatness' 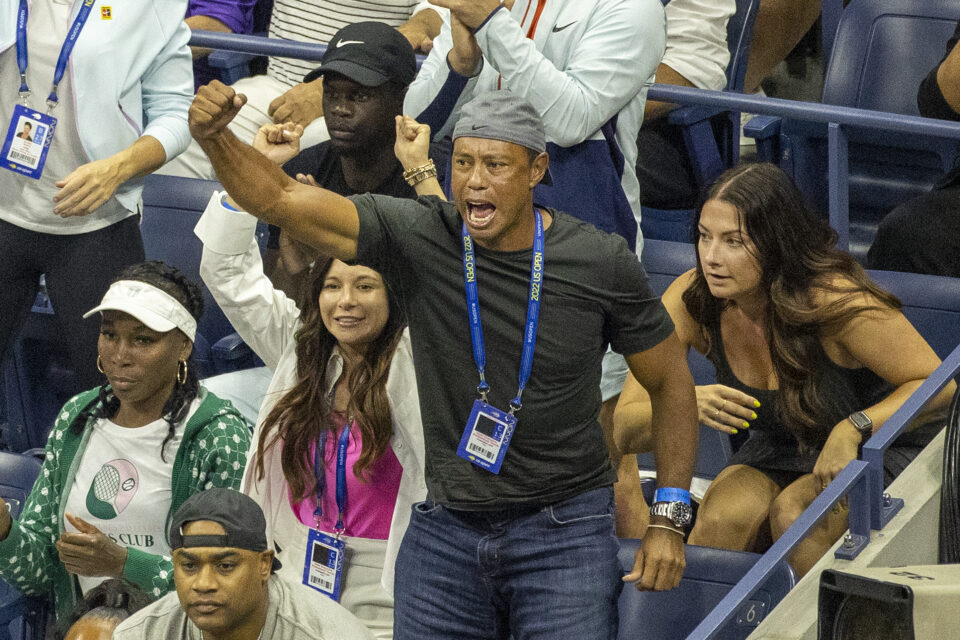 NEW YORK, USA, August 31: Tiger Woods reacts as Serena Williams of the United States makes a break against Anett Kontaveit of Estonia on Arthur Ashe Stadium in the Women's Singles second-round match during the US Open Tennis Championship 2022 at the USTA National Tennis Centre on August 31st 2022 in Flushing, Queens, New York City. (Photo by Tim Clayton/Corbis via Getty Images)

Tiger Woods couldn’t hold back his excitement while cheering Serena Williams on at the U.S. Open on Wednesday.

Williams, who announced her retirement last month, gave a humble response to her latest win in what will be her last U.S. Open.

“There’s still a little left in me,” Williams said during her on-court interview. “This is what I do best. I love a challenge and I’m rising to the challenge.”

Williams’ second-round match win moves her to the third round Friday against Australian Ajla Tomljanovic, 29. A number of famous faces have come out to see Williams play the U.S. Open for the last time.

On Wednesday, Woods sat alongside Willims’ older sister Venus and stood up at times to shout and cheer for the decorated tennis champion.

The golf champion responded to a tweet with a video clip showing his excitement while Williams played on the court.

“It was a privilege to watch greatness. Congrats @serenawilliams,” Woods tweeted.

Williams has earned a number of titles over the course of her nearly three-decade career. The 23 Grand Slam Title holder has earned six of her Grand Slam titles at the U.S. Open. In her past 25 matches, Williams has won against someone ranked No. 1 or No. 2.

After beating Kontaveit, the No. 2 seed left the press conference in tears, NY Post reports. Swarms of people had been fiercely cheering on Williams with it being her last U.S. Open performance.

The added support likely had an effect on Kontveit’s game.

“I mean, it was hard … it was something I never experienced before,” the 26-year-old said. “I don’t think it’s a personal attack against me or anything. I mean, it’s fair. I definitely had no shame losing to Serena. It was very difficult with the crowd.”