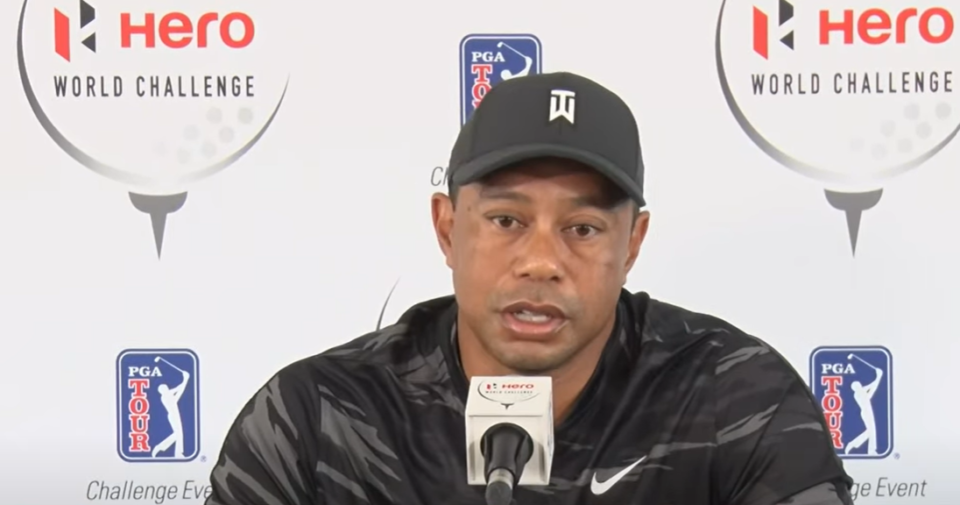 Tiger Woods made his first public appearance since his single-car accident in February and refused to answer any questions related to the crash.

On Tuesday, Woods appeared for a press conference at the Albany Golf Club in Nassau, Bahamas and spoke on his healing process over the last nine months. The golf champion made it clear that he wanted to put any reminder of the February 23 crash behind him, NY Post reports.

“This year is a year I’d like to turn the page on,” Woods said.

When asked what he remembered about the accident, the first place PGA tour winner shut down the prying and let it be known that he would not be reliving the traumatic experience.

“Yeah, all those answers have been answered in the investigation, so you can read about all that there in the post report,” he said.

Woods suffered multiple injuries to his leg due to the “high-speed” single-car crash that took place just outside Los Angeles earlier this year. At the time, Woods had to undergo extensive surgery that included stabilizing his leg by inserting a rod into the tibia, Golf Digest reports. Screws and pins were also used to stabilize the bones in Wood’s foot and ankle.

During the press conference, Woods explained how challenging the recovery process has been for him and all the work he still has to do.

“This one’s been much more difficult,” Woods said. “The knee stuff that I had on my left knee … those operations were one thing, that’s one level. Then you add the back, that’s another level. And then with this right leg, that was … it’s hard to explain how difficult it has been just to be immobile for the three months, just lay there and I was just looking forward to getting outside.”

Woods even revealed how amputation of his right leg “was on the table” during the immediate aftermath of the crash.

“I’m lucky to be alive but also to still have the limb,” he said. “Those are two crucial things. I’m very grateful that someone upstairs was taking care of me, that I’m able to not only be here but also to walk without a prosthesis.

“There were some tough times in there. There were some really, really tough times. Pain got pretty great at times, but they helped me get through it and I’m on the better side of it, but I’ve still got a long way to go.”

As a result of his injuries, the decorated golf champion is unsure if he will return to the game and at what capacity he will be able to perform.

“I’ll put it to you this way: As far as playing at the Tour level, I don’t know when that’s going to happen,” he said. “Now, I’ll play a round here or there, a little hit-and-giggle. I can do something like that. That’s something that for a while there it didn’t look like I was going to. Now I’m able to participate in the sport of golf. Now, to what level, I do not know that.”