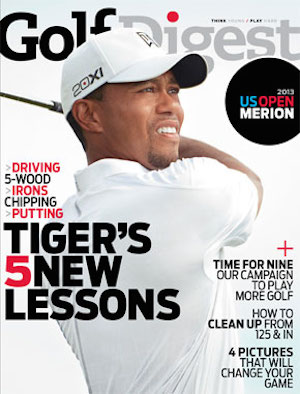 Headlined as “My Interview With Tiger,” the December issue features a subhead saying “*Or how it plays out in my mind.” Woods called the piece “a grudge-fueled piece of character assassination,” as Jenkins wrote a series of make-believe questions and answers that range from why Woods hasn’t fired his longtime agent Mark Steinberg to his relationship with Sergio Garcia to being a bad tipper.

Woods took to Derek Jeter’s The Players’ Tribune website to write a first-person account and decries that the made-up interview was contrived and asks in a separate letter to Golf Digest for a formal response and a written apology. “[Jenkins] has no idea how I think or feel about any of the things he claims to know about, which is why he had to make things up,” Woods wrote. “All athletes know that we will be under scrutiny from the media. But this concocted article was below the belt.”

Jenkins, 84, has been a longtime critic of Woods, stemming back to when the 14-time major winner first went profession in 1996. The well-loved Golf Digest scribe has let his issues be known from Woods never consenting to a one-on-one interview, but it never happened. Jenkins has covered more than 60 straight Masters, more than 200 of golf’s biggest tournaments, and has been inducted into the World Golf Hall of Fame in 2011. Woods, 38, turns 39 next month and has only played just eight times around the world this year. His season was cut short by a back surgery on March 31 and he has not played since missing the cut at the PGA Championship.

Woods is scheduled to return in two weeks at the Hero World Challenge in Orlando, Florida.