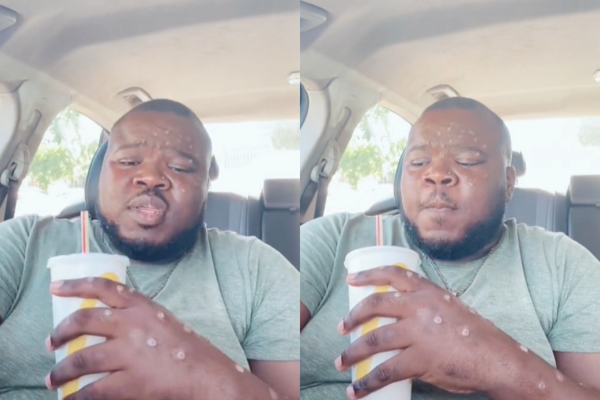 The TikToker who went viral claiming to have monkeypox is admitting to faking the virus to promote his music career.

Duane Cali has been under fire on social media after he posted a TikTok video earlier this month showing himself making a McDonald’s run while infected with visible monkeypox scars.

Cali faced backlash for the post and for allegedly going out in public while knowingly infected with the contagious virus.

“OMG why would you do this,” one user wrote in response.

Many others asked why Cali didn’t just order food instead of choosing to go to a fast food drive-thru himself.

The video ended with a statement and caption promoting Cali’s new music.

But now, Cali admits the monkeypox video was just a bad promo. Over the weekend, Cali returned to TikTok to reveal his process for faking the monkeypox virus to promote his music.

“This was just a promo gone wrong,” Cali said.

The singer claims he would’ve revealed his fake monkeypox sooner, but he was listening to too many outside influences. Cali claims he uses “unique and unconventional marketing methods” to promote his music and was just trying to stand out to bring attention to his brand.

The video showed Cali undergoing an intense makeup session where a makeup artist crafted the fake monkeypox bumps that he plastered across his face and arms.

@duanecali Replying to @tacochoosedays YALL have nothing to worry about. I was tranna tell y’all this in my other videos but y’all wasn’t hearing me lol y’all was only seeing me. Don’t believe everything you hear, don’t trust everything you see. But see all and hear all. Discernment is key. #fyp #live #love #laugh #melanin #black #prank #spoof #challenge #newmusic #newsong #discovery #payattention #watch #thehidden #viral #sandman #funnyvideos #reveal #getdressedwithme #dancechallenge ♬ Choose Yourself – Duane Cali

Despite his explanation, TikTok users continued blasting Cali for his drastic attempt at gaining clout and internet fame.

“This is the definition of doing too much,” one user wrote.

“all this hate around your brand now for a thousand followers,” added someone else.