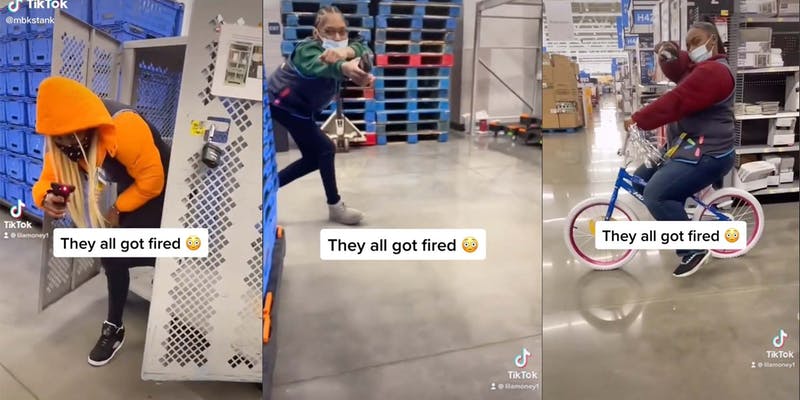 A viral video that shows a group of Walmart employees using price scanners as pretend guns has sparked debate all over the internet.

The TikTok—uploaded by @mbkstank—features eight employees and a caption over the video overlay that said, “they all got fired.”

Since its posting on Jan 9., the video has surpassed more than 500,000 views. Views quickly turned into rapid-fire mixed comments. Some were bothered by the flashing of the price scanners. Others were suspicious about the accuracy of the events — and if so, whether it justified firing the employees.

As shown in the short clip, several employees appeared on camera with price scanners in hand and pointed directly in the eye’s view. A hip-hop song was playing in the background, as some of the workers appeared from behind shelves and aisles, while another rode a bicycle and pushed a wagon. The caption accompanying the video read, “They got Walmart lit though.”

Some commenters called Walmart out for its firing practices.

“Walmart is not in the position to fire anyone,” @allureelements commented.

“Walmart not firing no employees unless you stealing or you quit yourself they barely have employees now,” @Katrina said.

“That’s the stores loss now they have to replace every single employee they just fired the store took an L on that one,” @jodecy60 exclaimed.

Other TikTokers argued that employees shouldn’t mess around on company time, regardless of the gained popularity.

“This is a business not a [playground],” @marquirethearteest24 wrote.

“While they was playing on the job,” @cynful_69 commented before speculating that “Ppl was shoplifting” while the workers were busy creating the video.

“Work is not where you play at,” @terranceva2sc wrote.

While other comments thought the employees were just having fun and being “cute.”

“lol not gonna lie. I thought I was watching a laser tag commercial” @Joe said.

Additional videos are posted on the same account with similar content. Some captions read, “they got expelled.” According to Newsweek, it is unclear whether the employees in the viral video were actually fired or if the videos were meant for social media entertainment purposes.