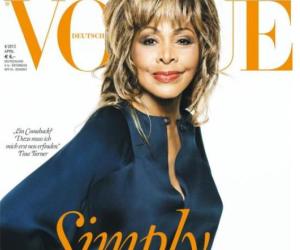 The April 2013 Vogue Germany cover is titled “Simply The Best!” and features one of the best to do it, the ageless Tina Turner. This marks Turner’s first time gracing the cover of Vogue magazine.

The 73-year-old singer, shot by Claudia Knoepfel and Stefan Indlekofer and styled by Nicola Knels, appears in a silky navy blouse and what appears to be a black skirt for Vogue’s German edition.

Fashionista.com points out that Turner might be the oldest Vogue cover star ever. Meryl Streep appeared on the American cover of Vogue last year at the age of 62.