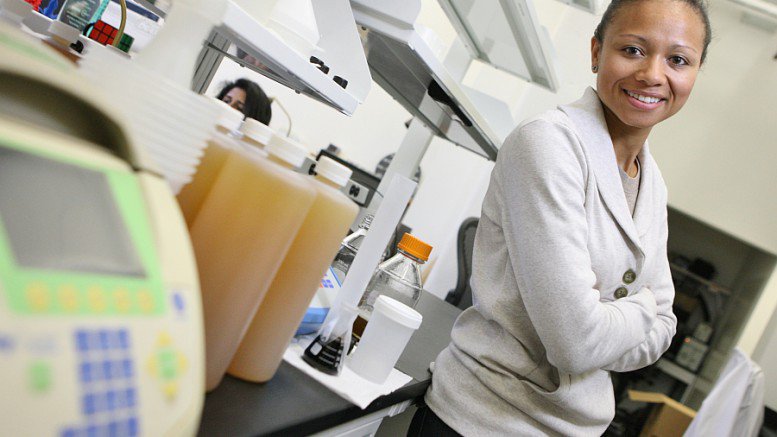 Tinia Pina is the CEO of Re-Nuble, an agritech company that makes products for hydroponic farm systems. (Imager: Twitter/@verticalgrower)

Tinia Pina is on a mission to end food insecurity and tackle climate change as the CEO of Re-Nuble, an agritech company.

Re-Nuble is a New York based, MWBE-certified company that uses vegetative food waste and turns it into nutrients for soil-less farms known as hydroponic farming. Pina told Essence Magazine the city was spending millions exporting food waste that can be used for good right here at home.

“NYC was spending millions of dollars to export food waste to places as far as Pennsylvania, Virginia and China,” Pina said. “My goal was to take this growing waste stream and use the nutrients to provide an alternative to synthetic fertilizers and chemical-laden food.”

Pina founded Re-Nuble in 2016, selling plant fertilizer to individuals and commercial farmers, but her true passion lies in urban farming and sustainability. Through Re-Nuble, Pina is ensuring those living in low income communities have healthy food options including fruits and vegetables.

According to NPR, 25% of U.S. families or more than 35 million Americans were either unable to acquire enough food to meet their needs, or uncertain of where their next meal might come from in 2019. The coronavirus pandemic has only made things worse.

Hydroponic farms allow commercial farmers to use only the amount of water and nutrients their crops actually need, which allows the farmers to grow more and helps fight climate change and other natural threats that can ruin an entire crop. However, there are limitations. Only certain vegetables can be grown this way. Food that grows in the ground such as carrots and potatoes still do best with traditional farming.

Pina initially invested $140,000 in Re-Nuble, taking out personal loans and maxing out her credit cards, something she said was risky, but she had to do to prove she was all in on Re-Nuble. It took some time before she found investors, but eventually, the Food-X Business Accelerator and other venture capitalists came running, pouring more than $1 million into Pina’s business.

For Pina, raising capital was the easy part, due to her background in finance. The hard part was learning all she could about the agritech business. Pina had to conduct all her research and teach herself the business and how to thrive in it.

Now, Pina is looking to expand Re-Nuble to the Middle East and Africa to help them become more resilient and aid in their food insecurity issues.