Tiny Projector Turns Your Wall Into a 150-foot TouchScreen! 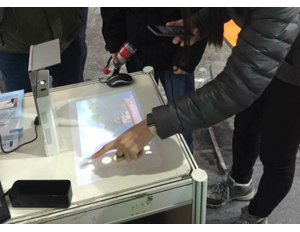 People test out the Lazertouch at a recent tech expo. (Image: Easitech, Indiegogo)

It only weighs 5 ounces. The Lazertouch Mini Projector is a tiny projector that transforms any surface into a projected touchscreen that scales from 20 inches to 150 inches.

The Lazertouch emits an invisible laser beam parallel to the projected screen. Lazertouch creates a virtual touchscreen and interactive whiteboard which can be sued for meetings, presentations, showing 3-D movies (it supports 200-inch HD movies), gaming, virtual reality, and more.

When a finger or stylus touches the laser beam, the sensor detects and interprets the touch to add your comments, double-click on an icon, stop or start a movie, or do anything else you would normally do with a touchscreen computer or device.

The pointer allows speakers to make clarification and emphasis–it’s the essential portable device for teachers, speakers, and business executives.

The company that makes Lazertouch, Easitech, claims that its LED projection lamp also promises “years of useâ€ with an estimated lifetime of more than 30,000 hours.

According to the manufacturer, since Lazertouch works as a tablet PC, projecting the image without a harmful LED screen, it is safe for children’s and adult’s eyesight–perfect for learning and watching TV and movies with children at home or in school.

Currently, the minuscule projector is a not-yet-fully funded Indiegogo project. At the time of this writing, it has secured $6,312 of its $30,000 funding goal. A pledge of $475 gets the donor the “early birdâ€ special–it’s the lower asking donation to receive the projector when it ships.

The estimated ship date of the Lazertouch is this July.