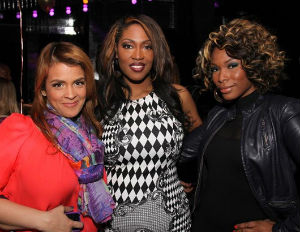 VH1’s The Gossip Game follows seven urban media professionals, as they navigate their way through the New York entertainment industry. From Power 105 to the Source Magazine, these women are on top of their game. However, there is a lot to be learned from how these women interact with each other both personally and professionally. BlackEnterprise.com breaks down business tips from episode 2 of ‘The Gossip Game.’

1. Demand respect in the workplace. As the only female of the morning show crew at Hot 97, K. Foxx is no stranger to male dominance or chauvinism. However, when your male supervisor is also working alongside of you as a peer, the lines can get blurred. In this week’s episode, K. Foxx’s program director, Ebro, insinuated that she “slept her way to the topâ€ on air. In any work situation, this is unacceptable. Once you have assessed any situation of disrespect in the workplace, the first step is to correct the problem immediately. If the issue is not resolved once you have confronted your superior, the next step may be to address it with someone in a higher position of authority.

Note: On the alternative, if you are indeed one who does not conduct yourself appropriately in and out of the workplace, you’re not going to earn the respect of others.

2. Never lose your cool. Typically, if you don’t get along with a co-worker or colleague you can choose not to be in the same social settings as them. However, like on reality television, there are times when you don’t get that luxury of choice. Because of this, you have to learn to remain calm in any and every situation. New York blogger Viv lost her steam after a heated argument with Ms. Drama, and ultimately, it resulted in a public (non-physical) brawl. No matter how angry you are, get a hold of the anger and either express your points calm and coherently, or walk away. In the end, you’ll only end up creating a dent in your own image.

3. Pay it forward. As a more than 20-year industry veteran, Kim Osorio is no stranger to industry beef. Throughout this episode, Osorio used her previous experiences to help give advice and even resolve the issues between her cast-mates. As women of color (especially in hip-hop), it is important to encourage and support those that come behind you — especially if you have once walked in their shoes. Someone can always learn from your mistakes.

4. Never let someone else taint or tarnish your brand. “Birds of a feather flock togetherâ€ is a statement that rings especially true in business. “There are people that I work with and I do business with here,â€ expressed Angela Yee after a very loud and public altercation between Viv and Ms. Drama occurred at her Bottles and Strikes bowling event. From a business perspective, the company that you keep says not only a lot about them, but you as well. You never want the actions of someone else [i.e. fighting in public] to affect your brand or your business. An element of success is being able to leverage business relationships. However, if you have a negative reputation, word will travel and deter other people from wanting to work with you.

5. In business, bring the passion, but manage the emotions. The underlying theme of every episode of The Gossip Game has been just that— gossip. Despite being media industry professionals, a lot of “he said, she saidâ€ rumors have occurred. True professionals are able to separate their business from their emotions. Not having emotional discipline can cause chaos, lack of control, and weakness—all traits that are traditionally feared (and looked down upon) for their potentially negative impact on the bottom line in business. If you are doing amazing work, let that speak for itself.

Check out the rest of the series: