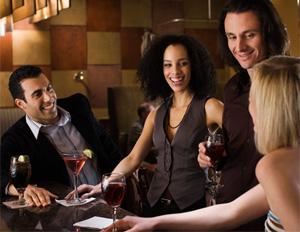 There are mixed feelings about making love connections at work. Like romantic relationships, friendships with co-workers have both risks and rewards. It’s all good to have an after-work drink after a stressful day, but where should you draw the line? If you’re the type of person is keen on creating bonds with your co-workers outside of the office, here are a few things you should think about. Brazen Careerist offers four good reasons it’s best to be approach with caution:

Look no further thanÂ The 40 Year Old Virgin to see the pitfalls of letting your colleagues into your personal affairs. After the main character Andy (Steve Carell) reveals his lack of experience in a certain…department, his coworkers immediately invade his personal space about very private matters.

Throughout the movie, they inundate Andy with unsolicited advice about love and continuously embarrass him. His coworker David (Paul Rudd) takes the cake when he stands outside of Andy’s apartment and screams, “Andy, for the last time, I don’t want your giant box of pornography!â€ Although this probably won’t happen to you (thank goodness),Â mixing business contacts and social media networks can be a recipe for disaster.

Need a real-world example? Five employees at Hispanics United of Buffalo, Inc. were fired the day after they made comments about a colleague on Facebook. They’ve beenÂ subsequently reinstated to their old jobs after a court determined their comments to be protected speech, but all of the involved parties endured significant turmoil as a result.