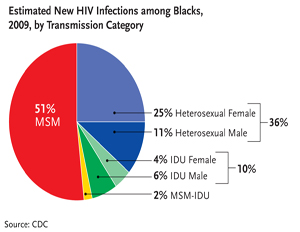 “On this National Black HIV/AIDS Awareness Day, we have greater opportunity than ever before to reverse the HIV epidemic in Black America and the nation as a whole,â€ said Dr. Kevin A. Fenton, director of National Center for HIV/AIDS, Viral Hepatitis, STD and TB Prevention, in a recent press statement.

African Americans are still most severely impacted by HIV/AIDS, however, it’s important to note over the past several years medical advancements have provided greater knowledge about the virus and disease, as well as greater treatment solutions.

According to the Center for Disease Control, recent research among heterosexual couples has shown that early treatment of an HIV-infected partner not only can improve their health, but also reduce their risk of passing the virus to their uninfected partner by as much as 96%.

Research has also demonstrated that pre-exposure prophylaxis, or PrEP–a daily dose of an antiretroviral medication–can significantly reduce the risk of HIV infection in some high-risk populations when provided with HIV risk reduction counseling, condoms, and other prevention measures.

Still, there is much more to be done.

A major issue is the lack of health insurance in the black community, says the CDC. Nearly one in five African Americans does not have health insurance. Also important, however, are the issues of homophobia and stigmas that prevent the demographic from getting tested and if HIV positive, seeking treatment.