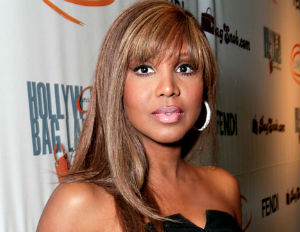 Toni Braxton was one of the most successful R&B singers of the ’90sÂ with her distinctive sultry vocal blend of R&B, pop, jazz and gospel. With more than 40 million albums sold worldwide and six Grammy Awards, Braxton managed to score not one, but two albums that sold over eight million copies that were accompanied by hit singles on the charts, one of which – “Unbreak My Heartâ€ – ranks among the longest-runningÂ number one pop hits of the rock era.

As of late, Braxton was struckÂ with claims of unpaid bills, diva attitudes and sibling rivalry. SheÂ admits to having to file for bankruptcy twice, and an unsuccessfulÂ marriage and run at the Las Vegas strip audience; but no one can sayÂ that Braxton doesn’t have staying power, as evidence by theÂ following pages of those influenced by Braxton’s appeal.

Braxton’s first professional experience was singing in the churchÂ choir with her four sisters (Traci, Towanda, Trina, and Tamar). TheÂ eldest of six siblings, she attracted the attention of Antonio “L.A.”Â Reid and Kenneth “Babyface” Edmonds of the famed LaFace Records.

Braxton knows a thing or two about writing love songs; her music firstÂ came to popularity on the soundtrack of Eddie Murphy’s movie “Boomerang.â€ The album sold ten million copies worldwide, spawning theÂ classics “Another Sad Love Songâ€ and “Breathe Again.â€ She received critical acclaim forÂ her second album, Secrets, with “You’re Makin’ Me Highâ€ becoming herÂ first #1 Pop and R&B hit single. The release of “Unbreak My Heartâ€ was
recognized with the coveted Grammy for Best Female Pop VocalÂ Performance. It has become her signature song, and ranks as the secondÂ top-selling single of all time by a female artist.

Toni Braxton had two successful runs on Broadway starring in “BeautyÂ and the Beastâ€ and “Aida.â€ She made her debut as Belle in Beauty andÂ the Beast in 1998 when she replaced Kim Huber. During her runÂ in the show, Alan Menken wrote a new song for the musical called “AÂ Change in Me,” especially for Braxton. It has been in the musical everÂ since. Her role in Beauty and the Beast marked the first and only timeÂ a black woman commanded the leading role of Belle on Broadway; and theÂ first time a black woman would star in a Disney musical on Broadway.

The opportunity to star in another Disney musical came with theÂ production of Aida in 2003. The lead role of Aida was originallyÂ occupied by songstress Heather Headley and later Michelle Williams.

Braxton was married to Keri Lewis, a former member of the R&B band,Â Mint Condition and they had two sons, Denim Cole Braxton-Lewis andÂ Diezel Ky Braxton-Lewis. The youngest child, Diezel, suffers fromÂ autism. As a result of Diezel’s diagnosis of autism, Braxton hasÂ become very involved, serving as the International Spokesperson forÂ Autism Speaks and appearing in public service announcements as anÂ advocate for research. Braxton also is active with the American HeartÂ Association as being diagnosed with Lupus.

In 2001, Braxton made her feature film debut as Juanita Slocumb in theÂ ensemble comedy “Kingdom Come” starring LL Cool J, Whoopie Goldberg,Â Loretta Devine and Vivica Fox. The next year in early 2002, Braxton appeared in the VH1 original movie “Play’d: A Hip Hop Story” along withÂ Faizon Love and Craig Robinson. In ’05, she appeared as Terry Knox inÂ the UPN legal drama, Kevin Hill, with Taye Diggs. Last year, BraxtonÂ has some fun in a family film, The Ooogieloves in the Big BalloonÂ Adventure, as Rosalie Rosebud and most recently starred in a LifetimeÂ film, Twist of Faith, alongside her own son, Diezel airing FebruaryÂ 9th.

Braxton is also enjoying huge success with her “Braxton Family Values” reality show on the WE network. Four episodes into Braxton FamilyÂ Values’ run, Rainbow Media’s WE TV renewed the reality show starringÂ Toni Braxton and her sisters, her parents and her sister’s husbands forÂ a second season with a 19-episode order, up from the 10 episodes theÂ network ordered for Season 1. Braxton Family Values, ranked as the #1Â telecast for women 18-34 during primetime among all ad-supportedÂ cable. The series also ranked as the #1 show among African-AmericanÂ viewers. New episodes air as part of season three this March.