Toni Braxton: On Bankruptcy, Beating Her Illnesses and the Braxton Family Values 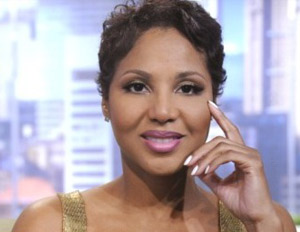 Toni Braxton might be known as that diminutive diva with a mean contralto that has earned her chart-topping hits, but the award-winning siren has endured the types of financial ups and downs that would rattle many. As a single mother raising an autistic son, Braxton has faced her life’s adversities, for the most part, in private. That is, until now.

Tonight’s debut of her dramality show, Braxton Family Values (WE 8/9 central)–featuring Toni, her four younger sisters (Traci, Tamar, Towanda and Trina), their children and her mom, Evelyn–promises to earn her as many viewers as her music did loyalists.

BlackEnterprise.com chatted with Toni about why she’s finally opening up, how her health took its toll on her finances, and what really happened when she first declared bankruptcy.

BlackEnterprise.com: Finally, you’re inviting your fans into your world. Why is it so important for you to tell your side of the story?

Toni Braxton: It’s important because I never have. I was reluctant to have folks in my space because it’s invasive; but my sister Tamar said, ‘if you don’t tell your story, you are gonna be setup when someone else tells it and it’s wrong.’ She said, ‘your kids need to know the truth from you.’ So I’m using this as a format.

Some critics have dubbed your family “The Black Kardashians.â€ Do you agree?

At first I was flattered because The Kardashians have a successful show (although The Osbornes were the real pioneers of family reality TV). But the only similarity between us and them is that we’re family and we’re women. The difference is that we’re preacher’s kids and a family of singers.

You’ve been candid about your bout with lupus and microvascular angina. Recently, you’ve explained that your money woes are health-related. How has your condition had an adverse effect on your finances?

A lot of people don’t understand what lupus is. I have discoid lupus, the kind that affects your organs. I tell people that if you miss that window for early diagnosis, it can be difficult to diagnose and result in heart disease or attack, which was my case when I developed pericarditis [inflammation of the fibrous sac around the heart]. My body was in a flare of the lupus, which caused my heart condition. I had just signed my contract when I was diagnosed and was forced to cancel my Vegas show because my doctor said it would take a good year before I was in any shape to get through an hour and a half performance. I was planning a tour and I had to get out of all of those contracts. Because I tied my money to brokering the [Vegas] deal, I was forced to file for a business bankruptcy to protect myself against people and vendors suing me. It was not because I was overspending or anything I did personally with my finances.

Is it true you will have to be on medication for the rest of you life?

Yes, chronic medication. When you see me looking chunky, it’s because of the steroid injections I receive which make me to appear bloated.

Your first bankruptcy occurred while you were signed to LaFace,but you weren’t able to talk about it. What went wrong?

No I couldn’t [talk about it] because I had a 10-year gag order. After TLC talked publicly about their bankruptcy [the label prohibited] other LaFace artists to talk, but now I can. I sold more than 40 million records, yet my royalty’s were less than $2000 dollars. People don’t understand that this issue went all the way to Congress about bankruptcy. All contracts are null and void except for a recording artist. Can you believe it? But the industry has changed now.

Some reports said that you were overspending and that the result was the financial trouble you experienced. Is that true?

People were reporting things like I bought Gucci flatware. Yes, I treated myself, and it was only $500. If I bought 1000 count sheets, they were from TJ Maxx for about $49, so I wasn’t living extravagantly. Yes, of course I spent money, but when you consider that an artist makes 4 to 7 cents on the dollar for every album sold and they have to pay back $20 million to the label for all the money that was spent to create, promote and sell that album, then, yeah, chances are you’ll end up in a whole lot of debt.

What would you say was the biggest money mistake you’ve ever made?

Tying up my own money for my Vegas show through my new company, Liberty Entertainment. Because of that, I had to file a business and individual bankruptcy. If I had to do it over again, I would get investors. I understand why you do it yourself because of the security; but putting your own money up isn’t [always] the best idea.

Going back to your family: Your son, Diezel, who has autism, is also going to be on Braxton Family Values. And we get to see you, as a single mom, raising him. How is he progressing overall?

Great. He’s talking–something I didn’t know he’d ever do. I’m just grateful and blessed because he’s wonderful. In the end, my family is everything to me.