I Took Toyota's New Space Age Car for a Ride 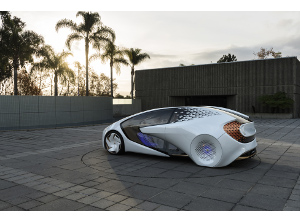 A big highlight at the CES 2017 technology show in Las Vegas this year was Toyota’s futuristic Concept-i vehicle.

Truly something out of science fiction, this is less of a vehicle and more of a mobile, robot friend. The car is powered by the latest in Toyota innovation, the artificial intelligence (AI) platform called “Yui.â€ You don’t just drive this car (or let it drive). You interact with it.

Yui is far more than software, it’s a personality. The AI acts as an interpreter between human and vehicle. With Yui, the Concept-i can self-drive, brake for you when manually driving, and can even tell you how you are feeling while you are driving.

On the Road With Yui

This is some seriously high-tech stuff. So, instead of just interviewing a bunch of engineers and marketing people, I was able to road test the Concept-i with Yui as my co-pilot, all through a sophisticated virtual reality demonstration setup by Toyota’s engineers.

The experience started with me creating a profile for Yui to get to know me better. I entered my name and my hobbies in an app.

When I entered the Concept-i, Yui greeted meÂ and then asked me where I wanted to go. By asking, I mean an actual voice emanating from the dashboard.

Yui offered trip suggestions based on the hobbies and activities I liked to do that I had entered into the app. The suggestions appeared in front of me, hovering mid-air in the dashboard area.

I selected my preferred destination simply by talking to Yui. No tapping, touch, or mouse click required. Yui showed me via a map that appeared on the dashboard, the routeÂ we would take and how long it would take to reach the destination.

I began my journey in a virtual neighborhood, which was supposed to represent me taking the car from my home. As the trip began, Yui informed me that I had full manual control of the vehicle.

As Toyota representatives told me, the goal is not to relinquish control of driving totally to a machine. Rather, it’s to allow humans the ability to manually drive when they want, say, on a nice day along a scenic coastal highway; and to hand-off driving to the car and software, say, when you are tired, or drunk.

I drove the Concept-i through my idyllic, little neighborhood. Whenever anything dangerous crossed my path, human or another vehicle, Yui, alerted me with a vocal warning and also went into “guardianâ€ mode to handle braking if I was too slow to react.

Once we reached the highway, Yui took over and started driving. Ambient music played, and Yui’s sensors honed in toÂ detect my level of relaxation. My driver’s seat automatically reclined and a massage pad on the seat began kneading my lower back.

Suddenly, a biker appeared from a side trail in front of the car. Yui deftly avoided an accident, braking just enough to avoid the bicyclist but not enough to lurch me forward. Had I been driving in the actual scenario, the outcome would likely have been worse.

What a way to drive! After I reached my destination, Yui informed me of what my emotions were during the course of the trip. Unsurprisingly, I was relaxed and happy for most of the journey.

The Concept-i is a beautiful vehicle. Winged doors open up automatically instead of outward, almost as with a Delorean, but not at as much of an angle. Inside, is a widescreen, 3-D, full-color display that lets you keep your head up looking to the road instead of down at a screen.

Watch the video of my experience riding in Toyota’s Concept-i.