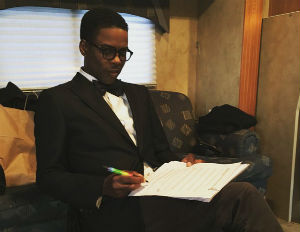 Last night many viewers tuned in toÂ the OscarsÂ for one reason and one reason alone–to seeÂ Chris Rock hosting the 88th Academy Awards.

Needless to say, Rock gave viewers exactly what they wanted, not to mention expected, with a loud, much-needed call out for the “lack of blackâ€ in Oscar nominations and recognition.

BlackEnterprise.com compiled a few of the most memorable quotes from Rock’s Oscar appearance for your viewing pleasure. Enjoy.

1. For starters, to set the tone for the evening Rock came out on stage to Public Enemy’s rebel anthem “Fight the Power.â€ So, there’s that.

2. During his opening monologue Rock announced, “If they nominated hosts, I wouldn’t even get this job.â€ ‘Cause, well, he’s black.

3. Also during his opening monologue, Rock criticized those who criticized his willingness to participate in the Oscars given the lack of diversity. “There are no black nominees so people are like, ‘Chris you should boycott. Chris you should quit.’ You know, how come it’s only unemployed people that tell you that you should quit something?â€ Guess you heard that.

4. Rock went on to pose a pressing question. “Why are we boycotting now? This is the 88th Oscars. This whole no black nominees thing had to happen at least 71 times.â€ Truth.

5. Rock alsoÂ made viewers cringe with his glorious version of the truth stating, “This year’s in memoriam package, it’s just going to be black people that were shot by the cops on the way to the movies. Yeah, I said it.” And that he did.

8. In a moment of utter Oscar confusion, Rock stepped aside as Stacey Dash came out on stage to state, “I cannot wait to help my people out. Happy Black History Month.â€ It was awkward. We can all agree–it was just plain awkward.

9. When returning from a brief commercial break, Rock stated the obvious: “Annnnd, we’re black.” As opposed to “We’re back.â€ This alteration did not go unnoticed.

10. In true hustler spirit, Rock brought out his daughter’s predominately black Girl Scout troop to sell cookies to the audience in order to beat his longstanding sales rival. The troop went on to raise $65,243.

Bonus: Rock ventured into a Compton movie theater to inquire about diversity in Oscar-nominated films. He got the most spirited, blackest responses one could ask for. In case you missed it:

Ultimately, Rock successfully shifted #OscarsSOWhite to #OscarsSOBlack in a way that only Rock could, and we were for it. Every bit of it.