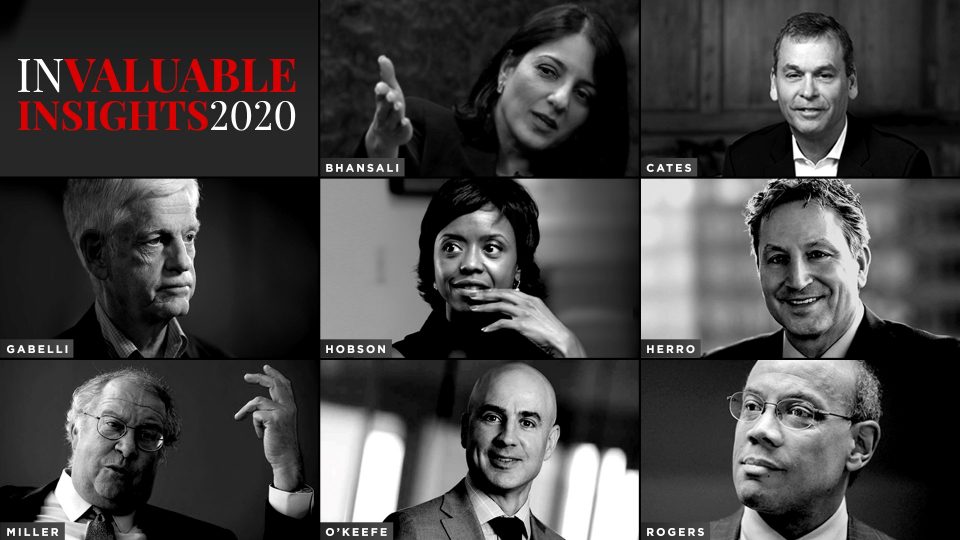 So just how do top asset managers make investment decisions in a pandemic-induced market? How can their unique perspectives help guide your own portfolio management? As the COVID-19 crisis continues to produce market uncertainty and investor anxiety, John Rogers Jr. and Mellody Hobson, co-CEOs of Ariel Investments L.L.C. (which ranks No. 1 on the BE 100s ASSET MANAGERS list) assembled some of the nation’s most successful value investors for last week’s powerful, 90-minute roundtable discussion: “Invaluable Insights 2020, Managers Unplugged.”

To view the entire session, access the following link and register here. The following are highlights from the session:

In the lively event opener, Hobson initiated a lightning round in which roundtable participants were asked to provide prognostications on the current environment. In response to her question related to how the nation will emerge from the economic downturn, Rogers was the only panelist to predict a V-shaped recovery characterized by a sharp decline followed by a speedy, sustained rebound while Bhansali, Herro, and O’Keefe believe it will resemble a U shape in which the economy takes longer to hit bottom before bouncing back. Cates and Miller said it would look like the “Nike swoosh,” marked by continual deterioration before a protracted comeback, while Gabelli maintained that due to the pandemic’s “second wave, it will be a W with a swoosh; a slow, extended recovery.”

In terms of domestic versus international equities, Hobson asked whether the S&P 500 or MSCI index “will outperform in the next three years?” Bullish on US stocks, Rogers, Gabelli, Miller, and O’Keefe endorsed the S&P 500 while Bhansali and Cates maintained MCSI will dominate. And five of the panelists voted that the Dow Jones Industrial Average would be higher over the next 12 months while Bhansali and Cates said the index would perform lower. As for the outcome of the US presidential election: All but one—Herro of Harris Associates—believe Biden would beat Trump.

Is Market Volatility Good or Bad for Investors?

Unemployment continues to climb to levels not seen since the Great Depression, surpassing more than 35 million. The federal government has already engaged in a whopping $2.2 trillion in stimulus spending to buoy the economy—and Congress seeks to inject another $3 trillion. And more than 30 states have begun the process of reopening their respective economies.

As these events began to unfold, roundtable participants shared their views on the nation’s re-emergence from the pandemic and the potential impact.

Bhansali says China’s example may provide an answer: “People are extremely uncomfortable, psychologically, to pull away from social distancing. That has implications for consumer discretionary spending. People are very concerned about their income level and are being frugal. We are going to have a lot of ups and downs.”

Rogers believes “the stimulus was very, very necessary…This could possibly be significantly inflationary.”

Despite such economic devastation and drastic measures to put the nation back on course, the S&P 500 and NASDAQ, among other market indices, have realized appreciable highs since mid-March. This dynamic sparked Hobson to ask whether there seemed to be a disconnect between recent economic news and market performance. In response, Miller asserts: “The market predicts the economy, the economy doesn’t predict the market. The market is looking forward and we’ve had enormous stimulus. If things are getting better, then the market will be reasonably well underpinned as long as there is plenty of liquidity going around.”

In further evaluation of past turbulent markets, Hobson found that during the current pandemic, the U.S. stock market took 22 days to fall 30% compared to 250 days during the financial crisis of 2008 and 257 days for the dot-com collapse of 2002. “In hindsight, investing through all those periods, what was this period like versus those other times?”

Gabelli says the market demonstrated the “same violent, unexpected” manner as the October 1987 stock market crash. Rogers agreed: “It also felt like ‘87 to me because of the quick downturn and a quick recovery afterward. And only a short time to take advantage of the bargains.”

When asked how distressed investors should deal with market tumult, the panel’s response was that they should use such conditions to their investment advantage.

Cates argues that volatility offers “our whole opportunity set. All of us try to coach that with our clients, that volatility is our friend. And this is a time when that really, really comes through. But I think if you’re ready with a wish list, you sure love seeing it on the buy side.”

Offers Herro: “Volatility is uncomfortable, but it’s a good form of discomfort because it allows opportunities. You have to be ready and you can’t be a deer in a headlight…It ends up with a very desirable result if you’re patient, and you’re a true investor over a period of time.”

O’Keefe adds that “it’s always hard to see the other side when you’re right in the middle of it. You have to remove yourself from the emotional volatility and focus on the long-term value.”

Hobson’s challenged the panelists with questions related to the continuous debate over growth versus value investing as well as the significance of active versus passive investment management. Bhansali maintains that passive is “like the definition of a bubble someone told me, when a good idea is taken to an extreme. I just think a lot of people are buying into it, not understanding what they are buying, why they’re buying it. So you are telling me that you can make an assessment of value in thousands of stocks which are in the index but you can’t pick a handful of active managers who can actually pick the right value.”

As you would expect, not a single member of the roundtable included index funds among their holdings.

In fact, Rogers is confident that value is “going to have a great decade. It’s so extraordinarily cheap. Our portfolios are 11 times next year’s earnings versus the index at 20 times next year’s earnings. There are just extraordinary bargains there. So I think you’re going to have an explosive upside for value investing. It’ll be much like after the internet bubble burst, and so many of us did so well coming out of that change. I think there’s going to be a violent turn that’s going to give value investors a really great, great opportunity over the next decade.”

The panel cited a number of industries ripe for buying opportunities. (Prior to the beginning of the session, attendees were given a disclaimer that the panel did not provide information “reasonably sufficient upon which to base an investment decision and should not be considered a recommendation to purchase or sell any particular security.”)

Rogers favors private equity, among other sectors. In fact, he says the mammoth firm KKR currently represents the largest position in Ariel Fund. “We have had a chance to talk to management and Henry Kravis. He’s excited about the amount of cash that they have to invest in this environment. They’ve also diversified around the globe, and in different products. So, it is a great, great sector, and we think it’s a great, great stock to own in this environment.”

Miller is drawn to FAANG stocks—Facebook, Amazon, Apple, Netflix and Alphabet (a.k.a. Google):  “I think they’ve performed so well because the companies are so extraordinary, in terms of return on capital, in terms of market share, in terms of defensible moats. If I look at Amazon or Facebook or Alphabet, Netflix is the most expensive in my opinion, but they’re not terribly expensive.”

Gabelli is bullish on content and responded to recent news reports that Amazon may merge with AMC Entertainment Holdings, which has had its stock price severely battered since it had to shut theaters across the globe due to the pandemic. “With Amazon, if I’m [Jeff] Bezos, what I want to do is understand how to get into content and how do I distribute it and accelerate that. I hope they put an X after the AMC and not look at the movie theater business recovery, and house content. So, there’s an AMC X that we own that we think is also very attractive.”

Rogers also embraces content, particularly ViacomCBS, the media conglomerate, which includes holdings such as cable outlets Showtime and Nickelodeon, Paramount Studios, and the “Tiffany Network.” He says: “They have really great content..and I think one way or another, they’re going to find a way to monetize all that content. And it could be one day that Apple or Amazon or someone else comes in and buys them, so they’ll have that content and not have to recreate it.”

Hobson shifted the conversation to an industry that has been largely grounded by the pandemic: airlines. In fact, she cited that Warren Buffet—all of whom admit being disciples of the man considered the world’s best investors—announced at his virtual annual meeting that he sold $6 billion worth of shares. “Delta and United are averaging 23 passengers per domestic flight, losing $350 to $400 million a day. Southwest, after 47 years of profitability this last January, is going to lose $30 to $35 million a day. American Airlines, trying to get its losses to $50 million a day, passenger traffic down 94%. [More than] half of the planes are parked. Interestingly, they got relief from the U.S. with stimulus, $25 billion for the whole industry, which I thought was a pittance compared to when you look at the global financial crisis, and each bank got $25 billion. So, what are you seeing that Buffett said, ‘I’m out?’ “

O’Keefe offers why his portfolio continues to fly high with Southwest: ” It’s got about $14 billion in cash on the balance sheet. It’s got about $8 billion dollars of unencumbered aircraft that it owns outright. It’s probably going to lose $4 billion or $5 billion this year but it can continue to operate for at least another year. It has enormous financial resources to survive, what I think most people would agree, is a temporary and anomalous situation. In other words, nobody’s flying. That can’t be normal and sustainable. You look at other periods of time, particularly in Asia, where you’ve had meaningful public health crises, we look at terrorist events. When the emergency is over, people will go back to doing what they’ve always done. People will fly again.”

Another highly challenged sector during the pandemic has been luxury retail. O’ Keefe believes a number of companies will weather the crisis and emerge stronger through radical digital reinvention. For instance, he cites Patek Phillipe. He says the leading ultra-luxury watch brands “which never sold anything on the internet, started selling watches directly to consumers on their website. So, what’s happening now is, obviously, we’re in this situation where if you want to do commerce, with a lot of brands, you have to do them online. And clearly, this is just going to accelerate.”

Bhansali’s take on the retail space: “Every business faces competition. So, yes, the retail industry faces competition from a new model of distribution, we think the supply chain. When we look at the exceptions to the rule [it is] Costco in the U.S.  They are resoundingly successful, because they provide a value proposition that nobody else can beat. I think any company, whether it’s a retailer, whether it’s a bank, can define your own destiny. You can take on competition if you build a business model that gives value to your customers.”