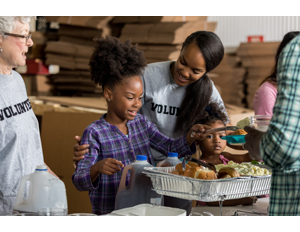 Harmonie Frederick, an irrepressible 11-year-old volunteer from Columbia, South Carolina, has been named one of the top 10 youth volunteers of 2017. The Prudential Spirit of Community Awards recognized FrederickÂ and nine others during the program’s 22nd annual national award ceremony in Washington, D.C.

One of 102 Top Teen Volunteers representing all 50 states, Frederick is also one of five African American students to be named a Top Teen Volunteer. The Prudential Spirit of Community Awards, the nation’s largest youth volunteer awards program for 22 years, selects students in partnership with the National Association of Secondary School Principals.

Congratulations to all the volunteers, who recognize that volunteerism helps everyone. According to a Top Teen Volunteers spokeswoman, “nine out of 10 teens who volunteer say that service makes them feel good about themselves, and more than half report feeling happier, less stressed, and more connected to people.â€

Volunteering is also a great way to stand out on scholarship applications.

Ayomide Okuleye, 17, of Washington, D.C.,Â a senior at School Without Walls Senior High School, started a club at her school dedicated to addressing a different social issue each year. In its first year, it provided hygiene supplies and winter clothing to homeless people.

Davian Powell, 14, of Lexington, Miss.,Â an eighth-grader at Williams-Sullivan Elementary School, has earned a reputation across his state for teaching and mentoring other young people to raise and show farm animals. He is a regular volunteer at several community events throughout the year and is an active 4-H member.

Debora Abera, 11, of Washington, D.C.,Â a sixth-grader at St. Augustine Catholic School, reads to children at her school and sorts books in the library. She also volunteers at an annual Thanksgiving feast for nearly 5,000 community members, where she serves beverages to homeless people; and at her school by assisting younger students during Mass and by running errands for her teacher.

Mackenzie Lewis, 10, of Columbus, Ohio, a fifth-grader at Berwick Alternative K-8 School, conducted two community drives that collected 1,350 cases of bottled water and more than 300 one-gallon water jugs for people in Flint, Michigan. After collecting 1,200 cases of bottled water and 300 one-gallon jugs, Mackenzie and 12 other youth volunteers from her church rode in a donated truck to Flint, where they handed out water at a church and gave the rest to a school and after-school program. Mackenzie made another trip to Flint, delivering 150 additional cases of water and 20 jugs to residents of two apartment complexes.

Harmonie Frederick, 11, of Columbia, S.C.,Â a fifth-grader at Polo Road Elementary School, sold lemonade to raise money to fight cancer and conducted a coat drive; she also volunteers at a local nursing home. Harmonie sold lemonade at her church to support cancer research after her mother developed breast cancer and her father contracted leukemia. She also recruited friends to help out at a breast cancer fundraising walk. When she noticed that a friend came to school without a coat, Harmonie initiated a coat drive through her church. At a local nursing home, Harmonie plays piano for the residents, calls out bingo numbers, serves ice cream, and polishes fingernails.