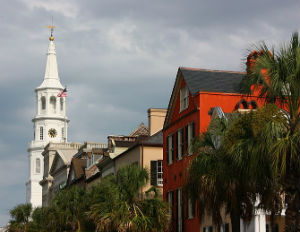 Here are the top 10 cities, according to travelers:

Inside City Scoop – While most cities in Japan are bustling with new buildings and architecture, Kyoto maintains Japanese tradition. Recognized as the birthplace of Geisha culture, the city features temples, colorful shrines and gardens, in addition to several not- to-be-missed restaurants.

Inside City Scoop – As South Carolina’s oldest city,Â Charleston has a lot to offer. From historic row houses lined along cobblestone streets to sophisticated hotels and some of the best restaurants and museums, there’s enough southern charm to keep you busy over a 3-day weekend.Â Check out T+L’s Guide to Charleston

Inside City Scoop – A colorful city, located in northwestern Cambodia, known for its many historical and religious sites, French cultural influences and rich, multi-faceted local culture. Explore Siem Reap’s many temples and take the city home in the form of handcrafted jewelry, dÃ©cor and unforgettable moments.Â Check out T + L’ Guide to Siem Reap

Inside City Scoop – An Italian city famous for its museums such as the Uffizi Gallery, cathedrals and churches, such as the Duomo, and everything shopping such as vintage clothing, shoes and leather bags. Check out T+L’s toÂ Guide to Florence.

Inside City Scoop- Another fan favorite for 10 years in a row, Rome, Italy, is known for its ruins and cultural hot spots including, the Roman Colosseum, Vatican City, Trevi Fountain/the Spanish Steps and more. Considering Rome is overflowing with restaurants, check out T+L’s Guide to Eating at Restaurants Tourist Don’t Know About.

Inside City Scoop – Travel and Leisure said it best “Navigating this teeming mega city can be a dizzying affair.” But don’t let that stop you from indulging in the eclectic culture and cuisine found everywhere from five star hotels and restaurants to street food vendors.Â Check out T+L’s Guide to Bangkok.

Inside City Scoop – KrakÃ³w is recognized asÂ one of the most culturally and politically significant cities in Poland. It was the central site of the Nazi General Government during WWII, and there’s still a residual feeling of solemnity here that’s especially apparent during visits to the Plaszow Concentration Camp and the Oskar Schindler Factory, according to Trip Advisor. Both the Historic City Centre and the Jewish District are brimming with cafÃ©s, shops, and pubs, and the 10-acre Main Market Square is a medieval feast for the senses. Check out T+L’s Guide to KrakÃ³w, Poland.

Inside City Scoop – Â A tourÂ ofÂ Gaudi-designed monuments and a stroll through Barcelona’s Gothic Quarter should not be missed. Â Also recognized as the capital of Mediterranean culture with incredible food, planning a tour of moveable feast at one of the many tapas restaurants in Barcelona is another must-do attraction.

Inside City Scoop – Whet your appetite for culture with a diverse array of edgy boutiques, luxury shopping, classic hotels, historical South African Museums and insane views of the ocean. Some must-see attractions includeÂ Whatiftheworld Gallery,Â District Six Museum andÂ Table Mountain. Also, some of the best vineyards are a short drive from the center of Cape Town.Â Check out T+L’s Definitive Guide to Cape Town.

Inside City Scoop – When in Jerusalem, take travel editor Pauline Frommer’s tip and head to the Austrian Hospice for unparalleled views of the city. Stay atÂ theÂ Waldorf Astoria,Â The Inbal Hotel or theÂ King David Hotel.Â Check out T+L’sÂ Guide to Jerusalem.

Crowd Cheers as Confederate Flag Comes Down In South Carolina