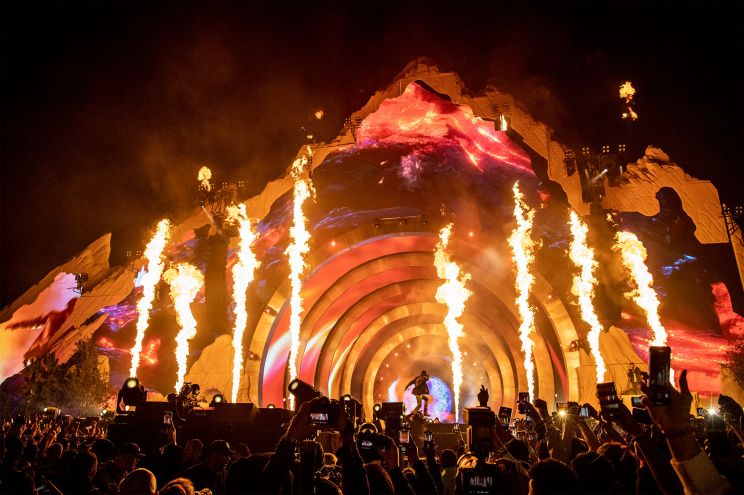 Authorities are investigating what triggered a “mass casualty incident” after 8 people died and several more were injured on the first night of Travis Scott‘s Astroworld Festival in Houston.

According to Houston Police Executive Assistant Chief Larry Satterwhite, the incident was classified as such when several audience members collapsed almost simultaneously.

“It happened all at once,” he explained during a press conference captured by KHOU. “It seemed like it happened over the course of just a few minutes, suddenly we had several people down on the ground experiencing some kind of cardiac arrest or some kind of medical episode. We immediately started doing CPR and that’s when I went and met with the promoters and Live Nation and they agreed to end early in the interest of public safety.”

All of Astroworld’s day 2 performances, scheduled for Saturday, Nov. 6, have been cancelled. In a statement on Instagram, organizers asked anyone with information about Friday night’s tragedy to contact Houston Police.

The Associated Press reports Scott himself was on stage at the time of the incident and, in a video posted to social media, appeared to stop his performance to ask for help for fans in the audience.

While Houston Fire Department, Police Department and Harris County Judge Lina Hidalgo – who all addressed the media together on Friday night – were hesitant to describe what may have caused the collapses, fans began sharing their horrific experiences at the concert on social media.

Houston Police Chief Troy Finner told reporters that the incident is being treated as an active investigation and that his department is withholding speculation until they’ve had an opportunity to review all the facts, including video footage from the show, which was being live-streamed on Apple TV.

“So my job as a chief of police, is to make sure that we find out what happened,” he said. “We will treat it as an investigation, because we don’t know. I have investigators here at the scene, I’m sending investigators to the hospitals. Because we just don’t know.”

The scene painted by attendees is much less organized and calm than what authorities presented. There have been several consistent accounts describing an overwhelming crowd causing several people to find it hard to breathe and eventually faint. Several fans have shared photos and video (that we will not share here due to their graphic nature) showing fans administering CPR on each other and of unresponsive bodies on the ground.

One young man shared a video in which he estimates the final death toll will be much higher once the venue had been fully evacuated.

Another young woman offered a detailed account of her own experience, having to assist in providing first aid to other after having fainted and being carried away from the crowd..

For this third iteration of the Astroworld Festival, Scott’s team and Live Nation had secured 367 police officers and an additional 241 security officers to cover Friday night’s sold out event. In addition, 55 units from HFD had been dispatched to support the field hospital set up by organizers at NRG Field, where the night of concerts took place.

The sold-out festival attracted an estimated 50,000 people on Friday. The field hospital treated a total of 300 patients, authorities said.

After declaring the mass casualty incident, HFD transported 17 people to area hospital, including 11 who were in cardiac arrest and receiving CPR in the ambulance. The name of the eight confirmed dead have not been released.

The Wyndham Houston Hotel has been set up as a reunification center for families who are trying to locate one of the fans in attendance.