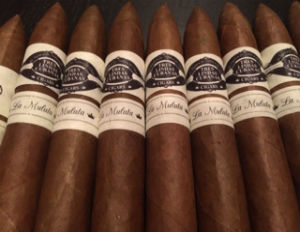 Whether you are a smoker or not, chances are at some point in your life you might have had cigar envy.

For some, there’s just something eye-catching and inherently trendy about firing up a stogie.

When it comes to cigars, it’s no secret that Cubans are top of the line, but of course ever since the 1962 embargo, everything with a “Made in Cuba” sticker became illegal here. But there’s another coveted option: Nicaraguans.

They come highly recommended by true cigar aficionados and are arguably just as good. Other countries like the Dominican Republic and Honduras make their own cigars, but since Cuba was the first officially recognized nation to cultivate, they’ve become the gold standard to which all others are judged.

Tres Lindas Cubanas Cigars, a black-owned cigar line is carving out a name for itself in the industry. BlackEnterprise.com caught up with twins Yvonne and Yvette Rodriguez, two of the four partners in the company, to talk about how they got into the industry and the family legacy that led them to a lucrative enterprise.

They recall memories of growing up on South Florida, where their grandmother would smoke cigars. The partners began working on starting the business last year after a trip out to Costa Rica.

“We were sitting by the pool and we met a gentleman who owns a cigar factory in Nicaragua. We frequent cigar shops on the regular and we partnered up to receive cigars from him regularly and before we knew it we were hashing out blends,” the sisters recall.

Tobacco flavor comes off the soil and climate of a location before it is harvested. By January they had a team in place here and in Nicaragua to grow, blend and roll the leaves and since then they haven’t looked back.

They created and market their cigar line in the spirit and reflection of today’s cigar aficionado; Urban sophistication and yet traditional.