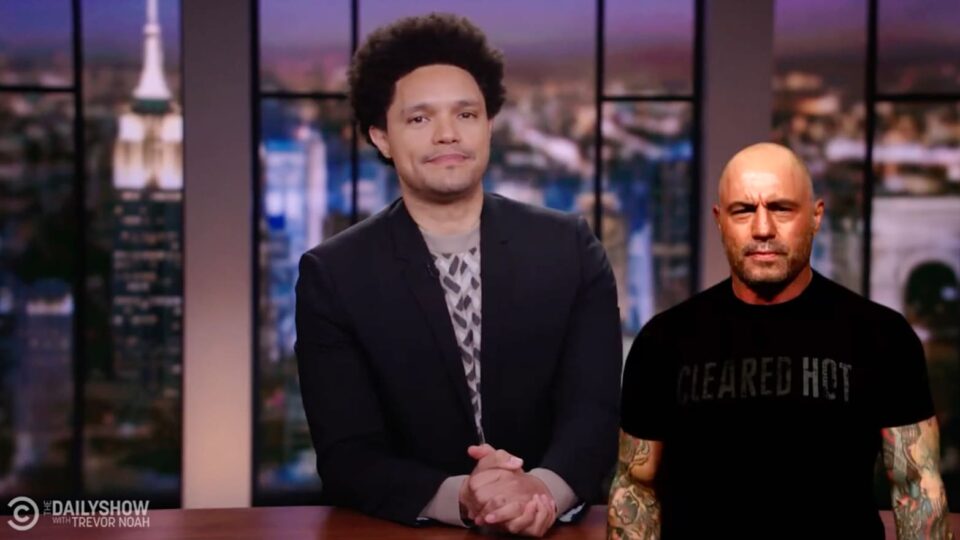 The Daily Show host Trevor Noah has thrown his hat into the ring in calling out Joe Rogan after old footage of him making racially insensitive comments and using the N-word recently resurfaced on the Internet.

On Noah’s Monday episode, the late-night host played a clip from India Arie’s recent video message explaining why she was removing her music from Spotify due to Rogan’s comfortability with using the N-word. Noah also played a clip of Rogan referring to Black people as “Planet of The Apes” in an old joke.

“If there’s ever a video of you saying the N-word that many times, you better pray one of two things: either you’re a Black person, or you’re a dead man from history,” Noah said.

On Saturday, Rogan released a video apology where he called his past N-word use “the most regretful and shameful thing that I’ve ever had to talk about publicly” but argued it was being taken out of context. Referencing Rogan’s “context” excuse, Noah decided to rip apart Rogan’s “bullsh*t apology.”

“Maybe you’re a professor teaching history, maybe you’re a news anchor reporting on a story about Joe Rogan, maybe you’re in a Quentin Tarantino movie, and you have to use the N-word, because if you don’t, the movie has no dialogue,” Noah jokingly said.

“But for the most part, as a white person, you never need to use the N-word.”

“Here’s a life hack for white people: saying the actual N-word puts you in unnecessary trouble, especially if you’re not racist,” he continued. “It doesn’t matter the context. Because Black people don’t have the time to sit down and sort out the racist who says the N-word 70 times with the non-racist who says the N-word 70 times. Black people are dealing with too much sh*t!”

During his apology, Rogan addressed his old racist joke where he referred to Black people as “Planet of The Apes.” In his video statement, Rogan claimed he “did not, nor would I ever, say that Black people are apes, but it sure fuckin’ sounded like that.”

But Noah wasn’t letting him off that easy.

“First of all, he said he would never say Black people are apes, but he said that. That’s literally what he said,” Noah responded. “You did say it, which is racist. And it’s not just racist. Let’s be honest – that’s like OG racism. That’s like the original, old-school racism. Like that’s on the Mount Rushmore of racism.”

Noah also highlighted the “particularly illuminating” part of Rogan’s apology where he claimed that he wasn’t being racist with the story, just entertaining.

“No, Joe, I think you were using racism to be entertaining,” Noah said. “I’m not saying you were trying to offend Black people, by the way, but you knew that offending Black people would get a laugh out of those white friends who you were with.”

Noah noted that Spotify has chosen to stand by Rogan and decided to delete the controversial episodes. Spotify CEO says he doesn’t believe “silencing” Rogan is the answer.