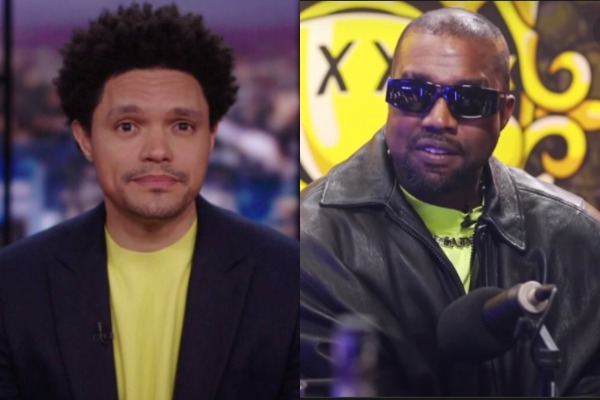 Despite Kanye West referring to Trevor Noah as a “koon,” the Daily Show host is against the rap/fashion mogul’s ban from this year’s Grammy Awards.

After sending a series of alarming posts aimed at Noah and other comedians, Kanye was slapped with a 24-hour ban on Instagram before being pulled from the 2022 Grammys. But Noah doesn’t think the bans are necessary.

Noah became one of Kanye’s targets after the late-night talk show host took to his show to defend Kim Kardashian and ask the public to “pay attention” to the rapper’s “harassing” behavior.

“There’s an element of a woman saying to her ex, ‘Hey, please leave me alone.’ “Noah said on the March 15 episode of his show.

“It touches on something that is more sensitive and more serious than people would like to admit,” he continued.

“I see a woman who wants to live her life without being harassed by an ex-boyfriend or an ex-husband or an ex-anything.”

“You may not feel sorry for Kim because she’s rich and famous,” he shared, “but what she’s going through is terrifying to watch. And it shines a spotlight on what so many women go through when they choose to leave [toxic relationships].”

The Comedy Central host even recalled his experience with domestic violence that resulted in his mother being shot by his stepfather. Once Kanye caught wind of Noah’s comments, the Yeezy founder sent out a screenshot of Noah’s Google results and called him a “koon” in the caption, TMZ reported.

The racist post was among a series Kanye sent out aimed at Kim’s boyfriend, Pete Davidson, and comedian DL Hughley, who also spoke out against the rapper’s alarming behavior. After Kanye’s latest Instagram tirade, reps confirmed to Variety that he was pulled from the Grammys for his “concerning online behavior.”