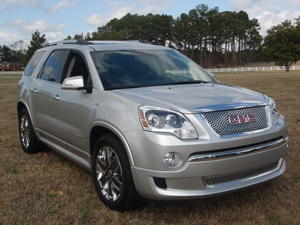 No denying this Denali (Image: JeffCars.com)

For the 2011 model year, GMC expands the Denali name to its midsize crossover line to the Acadia. This well-equipped, tricked-out crossover vehicle is outfitted with a chrome grille, monochromatic exterior color and high-intensity discharge headlamps (HID), along with the premium-class interior features noted above.

The Denali name is synonymous with the term luxury. Before this upscale model was added to the 2011 lineup, its sibling, the Buick Enclave was high on my list. Now, since the Arcadia Denali has arrived, it has soared to the top of the list, offering swag-appeal and many of the luxury amenities one would expect in a vehicle priced in the high 40s.

In addition to the aforementioned standard features, the upscale crossover I reviewed was outfitted with a touch-screen nav system, which featured real-time traffic updates, and an entertainment system that included a DVD player with a set of headphones.

The only optional feature that was omitted from our cool-looking street cruiser was a second-row center console to compliment the sliding second-row captain chairs. (As a side note, for those not wanting the captain chairs, bench seats can be substituted without any additional charges.)

Although this is one of the best crossovers I’ve driven, the vehicle lacked a few features I’ve come to expect on most premium-class vehicles priced at $49,000. While they weren’t available features, I was disappointed that the truck lacked the latest blind spot lane changing technology, a push-button keyless starter and a heated steering wheel to compliment the heated and cooled front seats. Also, the standard third-row bench seats are strictly designed for kids, as opposed to adults for long trips.

The tricked-out Acadia I reviewed combines the best of luxury with cool-appeal. Not only is this vehicle easier to maneuver than the full-size Denali SUV it mimics, the Acadia does it with flair, all while sporting 20-inch chrome clad wheels.

If you’re in the market for a smooth-riding, premium-class vehicle that stands out in a very crowded segment, the Acadia Denali should be at the top of your shopping list. And so that the price doesn’t approach the $50,000 range, consider steering away from the entertainment system and the all-wheel drive model. Without those features, this should push the price of this seven-passenger crossover down to the low to mid 40s, before rebates and negotiation.