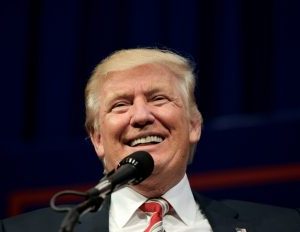 President Trump kicked off Black History Month with a breakfast at the White House that included Trump black bookends, Omarosa Manigault, and Cabinet-nominee for Secretary of HUD, Ben Carson; as well as other prominent, black Trump supporters.

Trump opened the meeting by saying, “Well, this is Black History Month, so this is our little breakfast, our little get-together.â€

He also mentioned traveling to places, “I wasn’t so familiar withâ€ with Carson and deemed African Americans “incredible peopleâ€ without actually specifying one example of African American achievement.

He did toss out the names of Frederick Douglass, Harriet Tubman, and other historical African Americans of which even white school kids are taught. However, he remained very vague about any of these notable figures achievements:

Frederick Douglass is an example of somebody who’s done an amazing job and is being recognized more and more, I noticed. Harriet Tubman, Rosa Parks, and millions more black Americans who made America what it is today. Big impact.

He took most of the opportunity to tiresomely rail against “fake newsâ€ and against accusations that his administration removed Martin Luther King’s Jr. statue when they occupied–er–moved into the White House:

You read all about Dr. Martin Luther King a week ago when somebody said I took the statue out of my office. It turned out that that was fake news. Fake news. The statue is cherished, it’s one of the favorite things in the–and we have some good ones.

Trump also made sure to get in his usual denigration of the inner cities, “We’re gonna work very hard on the inner city. Ben is gonna be doing that, big league,â€ repeating his mantra that the urban communities are terrible, despite admitting seconds ago he was going to black communities “he wasn’t so familiar with.â€

As you can imagine, Twitter was having none of it. Here are some of the best tweets on Trump’s Black History Month Breakfast:

The Tech 100 is an opinion column from Black Enterprise’s Tech EditorÂ Samara Lynn. It covers politics, social issues, and other topics intersecting tech. Follow her, @samaralynn.