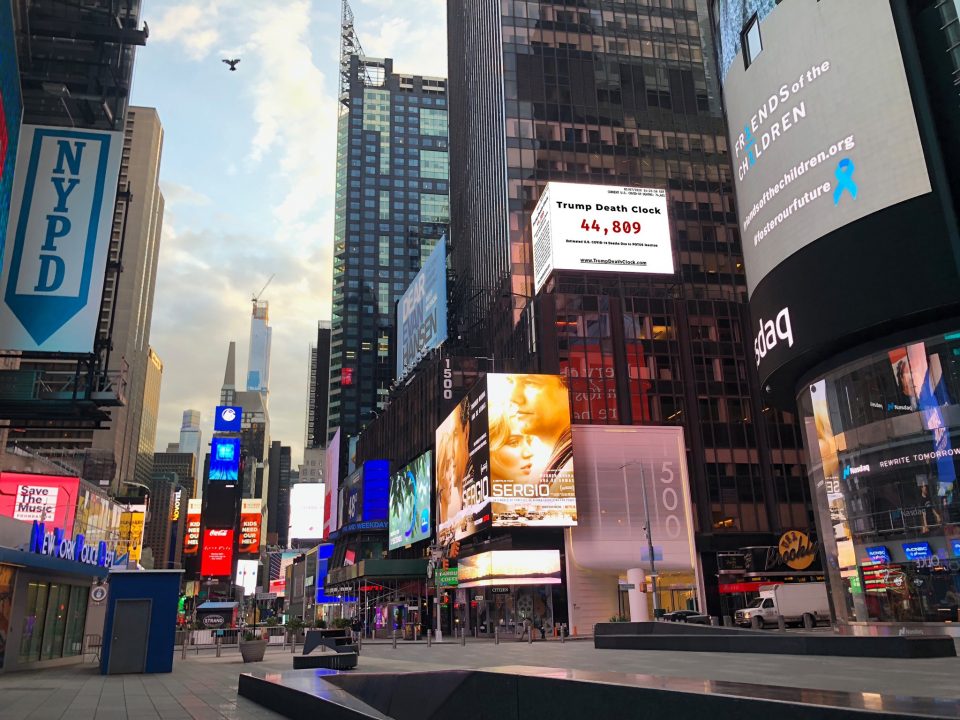 Photo of the Trump Death Clock in Times Square. (Photo Courtesy of Twitter)

A digital billboard in Times Square showing the number of deaths related to President Donald Trump’s slow coronavirus response, reached a grave milestone on Wednesday, as it ticked over to an estimated 50,000 preventable deaths.

According to Yahoo Finance, the “Trump Death Clock” projects the number of deaths that could have been prevented had social distancing measures been implemented earlier.

Eugene Jarecki, the sign’s creator, said the counter was created with the same “symbolic spirit” as the National Debt Clock, which already hangs in New York City. The Death Clock measures “the cost in human lives of President Trump and his team’s reckless handling of the coronavirus pandemic,” Jarecki told Yahoo.

Science and health experts began warning the Trump Administration of the coronavirus pandemic in January. The warnings fell on deaf ears, however, as Trump called the coronavirus a Democratic hoax.

Trump continued to downplay the coronavirus at the end of February, and even into March he compared it to “the common flu.”

As U.S. coronavirus deaths reached 85,00 Wednesday, the death clock showed more than 57,000 deaths could’ve been prevented. Jarecki said instead of saving lives, the president played politics and the counter reflects that.

“Reports show that as early as January, the president was advised by both his own experts and the intelligence services of the need for urgent measures against the spread of the virus,” Jarecki wrote in an op-ed for The Washington Post. “Instead, he engaged in pretty political feuds and pollyannish predictions minimizing its significance. Finally, on March 16, he reversed his previously dismissive stance and announced ‘new guidelines for every American to follow.'”

By March 16, the U.S. was leading the world in the infection rate, major sports had been cancelled for almost a week and the stock market was falling fast.

“Just as the names of fallen soldiers are etched on memorials to remind us of the cost of war, quantifying the lives lost to the president’s delayed coronavirus response would serve a vital public function,” he added.

In addition to almost 100,000 deaths, the coronavirus pandemic has killed ten years of job growth in one month and put many minorities and low-income Americans at risk of losing their lives.