Trump Picked a White Supremacist to be a Delegate 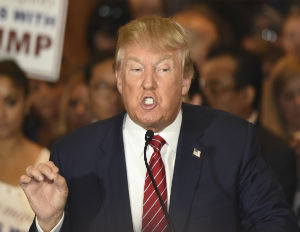 As first reported by Mother Jones, Donald Trump’s campaign selected a white supremacist as a delegate in California.

The delegate, William Johnson, is among the most well-known and influential white nationalists in the country. Johnson is the chairman of the white supremacist American Freedom Party, although apparently at first “the skinheads” thought he was “too extreme to run the organization,” as he explained in an interview with Mother Jones‘ Josh Harkinson.

The skinheads’ squeamishness toward Johnson perhaps stemmed from the proposed amendment to the Constitution he authored, in which he called for the deportation of anyone with an “ascertainable trace of Negro blood,” as well as anyone with more than one-eighth of “Hispanic, Mongolian, Asian, Asia Minor, Middle Eastern, Semitic, Near Eastern, American Indian, Malay or other non-European or non-white blood.”

“I just hope to show how I can be mainstream and have these views,” Johnson told Mother Jones, referring to his selection as a Trump delegate. “I can be a white nationalist and be a strong supporter of Donald Trump and be a good example to everybody.”

In perhaps the most chilling statement of Johnson’s Mother Jones interview, he bragged about the freedom the Trump campaign allowed other white supremacists to openly talk about….well, white supremacy.

“For many, many years, when I would say these things, other white people would call me names: ‘Oh, you’re a hatemonger, you’re a Nazi, you’re like Hitler,'” Johnson told Mother Jones. “Now, they come in and say, ‘Oh, you’re like Donald Trump.'”

While the Trump campaign tried to play off their selection of Johnson as a “database error,” claiming that he had been rejected in February, Mother Jones came through with receipts to expose the lie.

The e-mails clearly show that the Trump campaign had been in contact with Johnson as late as Monday afternoon, when they informed the white supremacist that he would be included on the list of Trump delegates to be sent to the California Secretary of State.

But wait. It gets worse.

According to a spokesman for the California Secretary of State, the Trump campaign missed the deadline to remove Johnson’s name from the list.

However, Johnson is no longer a delegate and will not attend the convention.

He voluntarily resigned on Wednesday, because apparently “we live in a society where white people hate white people who like white people. And me being a white nationalist doesn’t sit well with some people.”