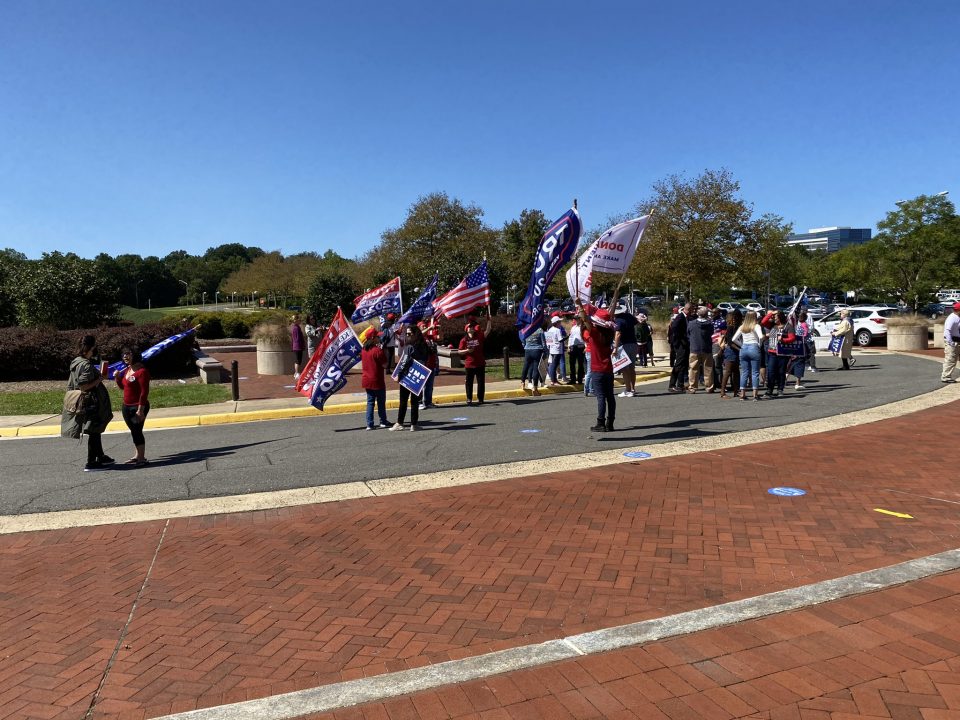 Trump supporters line up outside of a Virginia polling site. Image: Twitter/@AnthonyTilghman

Voters in Virginia lined up for early voting in Fairfax County Saturday, working their way through long lines.  However, they also encountered a group of Trump supporters.

As you can see here they are blocking the entrance to the voting site. #EarlyVoting #VA #FairFax pic.twitter.com/KJ6fbLdP3G

The New York Times reported county election officials were forced to open up a larger portion of the Fairfax County Government Center to allow voters to wait in line in peace.

Election officials told the Times the group mostly stayed about 100 feet away from the entrance to the building and did not block direct access to the entrance, however, they did say some voters and workers felt “intimidated” by the group.

“Citizens coming into and leaving the building did have to go by them,” Gary Scott, the general registrar of Fairfax County, said in a statement. “Those voters who were in line outside of the building were moved inside and we continued operations. Some voters, and elections staff, did feel intimidated by the crowd and we did provide escorts past the group. One of the escorts was the county executive.”

The incident painted a concerning picture of what might happen across the nation on Election Day. Voting issues such as climate change, student loan debt, and the Trump administration’s coronavirus response has already made this one of the most contentious elections in U.S. history. The passing of Supreme Court Justice Ruth Bader Ginsburg has added abortion rights to the list.

The group of Trump supporters did not start at the polling center Saturday. The “Trump Train” parade began in Prince William County before traveling 25 miles east to the polling site. the event was set to end in the parking lot of the government center.

After the event officially ended, some of the people who attended went to the building to vote, while others stood outside the entrance screaming four more years. Sean Rastatter, a vice-chair at the Fairfax County Republican Committee, who was at the building told the Times he believed the situation did not cross the boundaries into voter intimidation.

“I don’t think there was any way to need or feel intimidated in any form,” Mr. Rastatter said adding that election officials told the group several times to back away for the curb and the group complied without argument.

However, Bryan Graham, the chairman of the Fairfax County Democrats, who was also at the site posted on Twitter “the Republicans are straight-up attempting to intimidate voters at the Government Center. Circling the parking lots with their Trump flags and horns blaring.”