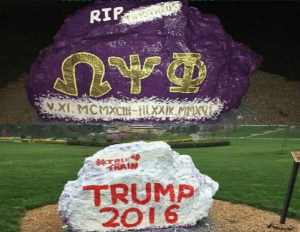 James Madison University has been caught in a social media firestorm after a troubling on-campus incident involvingÂ Donald Trump’s supporters.

The students stayed up late into the night on Friday to finish painting the rock in time for a vigil on Saturday. By 7 a.m. the next morning the rock had been repainted in homage to Donald Trump.

James Madison University is foul for this one. #JMU pic.twitter.com/d3gJiRd5rk

Fortunately, the students were able to repaint the in time for the Saturday night memorial.

In a statement released that same day, JMUÂ  stressed that Spirit Rock is an “outlet for free expression,” therefore students can not reserve Spirit Rock, nor is there any “guarantee as to how long a message can appear on Spirit Rock.”

The statement also noted that the “Trump 2016 message” had been painted over by 1 p.m.

The disrespect & ignorance it takes to re-paint a FRESHLY painted rock that clearly says RIP….JMU, DO BETTER. pic.twitter.com/vCAxrrPZKV

The JMU administration then found a reason to inexplicably pat themselves on the back for apparently teaching their students “to think critically and to value mutual respect,” and to “demand that we treat each other with dignity.” But, in the same paragraph, JMU dismisses the targeted incident as nothing more than an “expression of support for a political candidate.” Apparently at JMU mutual respect and dignity are reserved for Trump supporters, but not for the black student community mourning the death of a fellow JMU student.