Trump's Impeachment Will Likely Help Him Get Reelected

By now, you are either convinced that impeachment is warranted or view the multiple rounds of Congressional hearings as a waste of political capital that is based on hearsay, which only emboldens Republicans.

Either way, it is essential to prudently sift through the political theatrics that arguably is worthy of a Broadway Tony Award but doesn’t score rave reviews in recent polling. At least not for a critical voting demographic that will have an impact in the 2020 presidential election: Independents.

According to a recent Marquette poll, Wisconsin voters are not as interested in impeaching President Trump as they were from the outset of the hearings. The poll found that 53% of voters are opposed to the Democratic House majority moving forward to impeach the president, while only 40% approve of impeachment and removal from office.

Wisconsin is an essential swing state for Democrats and Republicans alike to win in presidential elections. With less than one year before the general election, voters are gradually getting fatigued with the daily soap opera comprised of political banter and sound bites from both sides of the aisle. All of which does nothing to help to stretch working-class household budgets or improve their lives in any way.

Speaker Nancy Pelosi previously held a position against moving forward with an impeachment inquiry citing that it would divide the country. Well, she is right and it will likely help President Trump gain support from undecided voters and it has already bolstered his fundraising.

So, what are the four critical questions voters across the country should ask?

No, there is no conclusive evidence of a quid pro quo related to U.S. aid given to the Ukrainian government. Ambassador Gordon Sondland—a key witness in the impeachment hearings—stated that his personal opinions are solely based on his presumptions and he did not receive direct confirmation from President Trump or any White House official that U.S. aid was conditional. Other witnesses shared similar views based on their perceptions.

The newly-elected Ukrainian President Volodymyr Zelensky campaigned on the promise to root out corruption in his country. Hence, on the controversial July 25 phone call between President Trump and Zelensky, Trump asked Zelensky to investigate Hunter Biden’s lucrative contract with Burisma Holdings, a Ukrainian natural gas company, and to investigate any corruption related to campaign interference in the 2016 U.S. election.

The Democrats believe that Trump was asking a foreign government for a personal political favor by investigating a potential campaign rival. While Republicans claim that during the Obama administration, Vice President Biden withheld $1 billion of U.S. aid to Ukraine until its president at the time fired the prosecutor who was investigating Burisma Holdings—the company in which Hunter Biden served on the board.

Regardless of how you view both situations, one thing is very clear. The aid given under Trump was delayed but given without any conditions or quid pro quo, while at Vice President Biden’s direction, the prosecutor was fired and the $1 billion to Ukraine was released with no further investigations into Burisma Holdings and Hunter Biden.

U.S. foreign aid is given for a myriad of reasons. Namely, humanitarian causes such as hunger, disaster relief, health, and more. However, aid is also granted to prevent wars, arm allies in civil wars or regional conflicts, and to incentivize behaviors that support our national interests and values.

Democrats are heavily invested in impeaching Trump, so anything short of the House following through will likely derail their chance to regain the White House. However, perhaps the greatest risk was heading down the impeachment path on allegations based on hearsay without conclusive proof, which only corroborates Trump’s claims that the hearings are a “witch hunt.”

Even if Democrats impeach the president, the Republican-controlled Senate would not remove Trump from office. Some even believe that impeachment would help Trump get reelected. One of the challenges with reelection bids is drumming up the same excitement that matches the initial win. Although President Obama won his reelection, his voter turnout was lower in 2012 than his historic win in 2008. Hence, impeachment energizes Trump’s base in ways yet to be realized.

Regardless of your political views, the majority of Americans know who they will likely vote for but it’s the conservative Democratic, Independent, and undecided voters that will sway the election. So, the outcome is binary—either we will have a repeat of #45 or a new #46. But one thing is overwhelmingly likely if the strong economy continues, record low unemployment remains constant, rising wages trends higher, and the stock market remains in historical territory, Trump will be reelected. 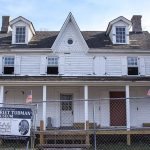 Harriet Tubman Museum to Open in New Jersey in 2020