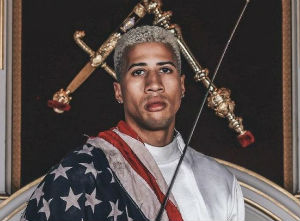 The following was written by J.R. Gamble, Senior Writer:

Before Rio, we sat down with the Olympic medalist who’s changing the face of the game

Team USA fencer Miles Chamley-Watson won a bronze medal last night in the men’s team foil competition.Â Chamley-Watson and his teammates–Gerek Meinhardt, Alexander Massialas, and Race Imboden–captured the bronze with their 45-31 win over Italy, marking the first time in 84 years that Team USA medaled in the event.

Prior to departing for the 2016 Olympics in Rio, The Shadow League’s J.R. Gamble caught up with the young man who he describes as “the Jackie Robinson of fencing with the flair of Rickey Henderson”Â who is changing the face of his sport.Â

Fencing is one of the five original Olympic sports and has been a mainstay event at Olympic Games since 1896 in Athens, Greece. It’s also one of the oldest sports ever invented with an origin dating back to the 15th century.

The beauty of fencing was once in its exclusivity and anonymity, which always protected the virtues, etiquette, and historical direction of the sport. Americans don’t traditionally dominate on an international level and most African Americans probably didn’t know the sport existed until a kick-ass, mold-breaking, ground-obliterating, fencing machine named Miles Chamley-Watson from Manhattan, via London, sliced into the scene and started shredding competition.

“It’s a really intimate one-on-one combat,â€ Chamley-Watson told the Shadow League in a recent interview covering his brilliant rise to fencing pioneer. “You have a weapon in your hand that makes you really powerful. That’s what drew me to it.â€

In 2013, Chamley-Watson, of Jamaican, Irish, British and Malawian descent, stormed the game and flipped it upside down with his light black skin, his bleach-blond hair, urban jungle personified gangsta grillz, intelligence, side gig as a fashion model and demonstrative expression. The 23-year-old who always knew he’d leave a mark, but didn’t know how soon, became the first American to ever win the World Championship in Senior Men’s Foil.

Read the rest at www.theshadowleague.com…

Power Launch Your Tech Startup with the Coffee Strategy

4 Lessons From Other Countries That Can Improve Our Teacher Training