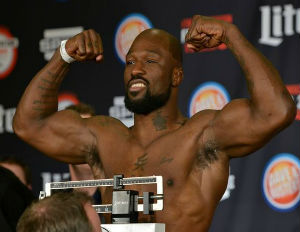 Fresh off his win at Bellator 134 against fellow Mixed Martial Arts (MMA) fighter Cheick Kongo, Muhammed “King Moâ€ Lawal speaks with The Shadow League (TSL) about the fight that caused some choice and derogatory word-flinging to be exchanged in social media.

34 year-old Lawal speaks candidly to TSL about his strategy to beating a taller opponent and his views on upcoming fights and sporting events.

Lawal is a MMA fighter and professional wrestler with Bellator and fought in Bellator 134 on February 27 against Kongo. Bellator was founded in 2008 and boasts as one of the world’s largest MMA promotions.

Listen to the podcast below.