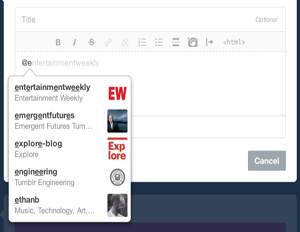 Popular microblogging platform Tumblr announced on Tuesday users will be able to directly mention others on the site, reports Mashable, a feature many Tumblr enthusiasts have requested. The Yahoo-owned platform’s change will make Tumblr more of a social network.

Here’s how it works: When inside a Tumblr post, simply type the “@â€ symbol before someone’s username to tag the person. Tumblr reports these notifications will now appear for others both in-stream on the main Dashboard as well as on the “Activityâ€ page, where users can see things like follows, likes, and reblogs, among other things, according to TechCrunch.