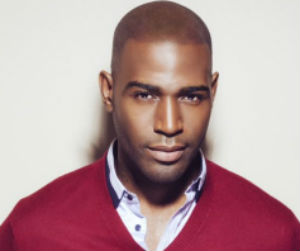 Karamo Brown became the first openly gay African American on reality TV, when he appeared on MTV’s The Real World in 2004. He’s not afraid to live proud and out loud. He’s bringing his bold attitude to Atlanta’s 10th annual Black Pride Celebration, empowering the community to stand positively fearless.

Launched by Janssen Therapeutics, Positively Fearless is a campaign that celebrates being black, gay, and even HIV positive. Brown will address ATL Pride audiences (PureHeat Festival in Piedmont Park on Sunday, September, 4) about how to reduce the spread of HIV by encouraging people to get tested. And for those who are HIV positive, he will speak on how they can take a proactive role in their health by seeking treatment and sticking to it.

BlackEnterprise.comÂ spoke with the TV host and Access Hollywood correspondent to discuss how the community can take action to change these realities.

BE:Â Given the alarming rates of HIV infection in our communities, what are still some of the challenges?

Brown: The reason I started 6in10 was because of a CDC statistic that reported that six in 10 black, gay and bisexual men in the South would contract HIV before the age of 40. Today, that number is one in two. It’s the stigma and it is self-esteem that is causing people to be scared to get tested, to seek treatment, and to have transparency with their doctors. When you have members of your community and members of your family scaring you, telling you that no will love or support you, why would you get tested? If the outcome of your diagnosis is undesirable, you will feel like your life is over. You won’t want to get treatment, because you won’t want people to know your business.

BE:Â What role should school administrations play in educating our youth?

Brown:Â It’s up to parents to educate young children (ages seven to 13). Janssen has created the hashtag #PositivelyFearless and a new Twitter handle @HIVWisdom.Â  People can share their stories and tell others about a time when they chose to be honest, to be brave, to get tested, to tackle their diagnosis head-on, and to be open with their doctor about treatment. Parents can use (these stories) a resource to talk to their children about HIV. It needs to be a school administration priority for college-aged kids. Studies show HIV rates and STDs on HBCU campuses have skyrocketed. There needs to be a mandatory sex education student orientation, so that this isn’t a taboo subject and they have the tools.

BE:Â How can our communities take action?