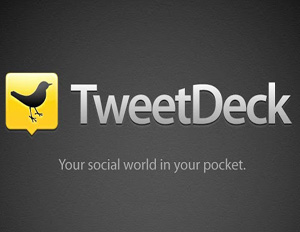 Popular social media platform TweetDeck is shifting gears, killing off its older mobile offerings like TweetDeck AIR, TweetDeck for Android and TweetDeck for iPhone, and focusing more on its web-based versions. The apps will be removed from their respective stores in early May and will stop working shortly after that, TweetDeck announced on Monday in a company blog. TweetDeck also said it would terminate support for its Facebook integration.

“In many ways, doubling down on the TweetDeck web experience and discontinuing our app support is a reflection of where our TweetDeck power-users are going,â€ the service said on its blog. “Over the past few years, we’ve seen a steady trend towards people using TweetDeck on their computers and Twitter on their mobile devices. This trend coincides with an increased investment in Twitter for iPhone and Twitter for Android–adding photo filters and other editing capabilities, revamping user profiles and enhancing search. That said, we know this applies to most of our users —— not all of them. And for those of you who are inconvenienced by this shift, our sincere apologies.â€

Die-hard TweetDeck users, there are plenty of tools out there that can get the job done, so here are several top alternatives:

Highly-popular Twitter management tool, HooteSuite allows users to link to their networks and build a screen that displays up to five of your primary social streams, choosing from Facebook, Twitter, LinkedIn, Ping.fm, WordPress, MySpace, Foursquare, and mixi.

While this platform isn’t cheap, it does offer several capabilities that HooteSuite does not. This platform allows users to schedule posts and get snapshot metrics.