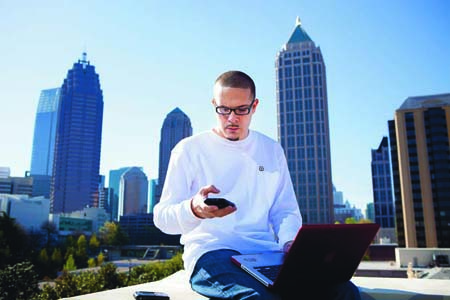 Social media comes naturally to Shaun King, an Atlanta pastor with a penchant for technology. In the ’90s he was one of the first people in his high school to have an e-mail address, and was a regular on Twitter in early 2007, way before most of us knew what a tweet was.
When he formed his inner-city ministry, The Courageous Church, he used Facebook and Twitter to grow the membership to almost 400 members in three years. “I’ve found social media to be an amazing tool to connect people to causes. Ten years ago if you were very interested in Haiti you might not know anybody else who really loved Haiti,â€ says King, who travels to the country monthly. “Now, because of Twitter you can not only connect with tens of thousands of people that love Haiti, but you can connect with tens of thousands of Haitians in Haiti. It makes your world so much smaller. It’s a powerful thing.â€

In March 2010, King started aHomeinHaiti.org as a subsidiary of The Courageous Church and began raising money on Twitter and eBay to send tents to the homeless after the devastating earthquake that uprooted the country. He raised $400,000 by the end of March, but donations began to dwindle until he received a call from Desperate Housewives star Eva Longoria, who offered to help raise money using her network of media connections. “I was kind of skeptical. I didn’t know that her involvement would really make that big of a difference,â€ says King. But it had a huge impact. Donations increased to $1.5 million by August and The Courageous Church sent more tents to Haiti than any other charitable or government organization, he says.

The success that Longoria’s celebrity generated along with his fascination with Twitter, inspired King to launch TwitChange in September. Essentially, people have the opportunity to bid money for a chance to have their favorite celebrities follow them on Twitter for 90 days, mention them in a tweet, retweet one of their tweets, or all three. When fans visit the TwitChange website and click on a celebrity, a link takes them to eBay where they can place a bid for that celebrity. The highest bidder wins.

Along with Longoria, more than 175 celebrities joined TwitChange. Musicians such as Alicia Keys and Wyclef Jean, and athletes such as Serena Williams, participated in the first campaign launched in September. As a result of their influence, 11,000 fans bid between $5 and $26,000 to be associated with these celebrities on Twitter. Some celebrities threw in extra incentives to sweeten their packages. For example, NBA star Shaquille O’Neal included four tickets to the Boston Celtics’ season-opening game.

King, a graduate of Morehouse College and self-taught Web designer, created the skeleton of the TwitChange website and then outsourced the remaining graphic design work to a volunteer consultant. Longoria became the face of the organization, recruiting other celebrities and spreading the word through media interviews. Some 100 people volunteered to see the project to completion. The website has received 70 million hits since September, says King.

But the endeavor was not without its challenges. “We had an amazingly difficult time with a lot of celebrities who didn’t follow through with their commitment,â€ says King, a former Webmaster at a megachurch. “We learned some really hard lessons the first time around.â€ Between $50,000 and $60,000 had to be returned to winner’s who made bids on eBay but who didn’t receive a tweet in return because the celebrity didn’t understand the rules or refused to retweet an inappropriate tweet. King learned that he needed to obtain valid contact information and create a confirmation form that celebrities filled out. The website was redesigned and re-launched to include those changes.

Through TwitChange, aHomeinHaiti.org campaign, has also raised $500,000 to rebuild the Miriam Center, a school and residence for children in Haiti with cerebral palsy and severe autism. Since September 2010, TwitChange has sponsored two more campaigns: Operation Once in a Lifetime, which NFL Super Bowl Champion Troy Polamalu has partnered with to provide financial relief to U.S. servicemembers, their families, and veterans; and CARE, which raised enough money to send 1,000 girls to schools across developing nations. Collectively, the two campaigns brought in more than $300,000.

“Twitter and social media have become very important channels for nonprofits and for CARE, but so far not very important for their ability to raise funds,â€ says Adam Hicks, vice president of marketing and communications for CARE USA. “That is why TwitChange is such a fascinating thing. The TwitChange team has unlocked a vehicle that not many people have cracked to make Twitter a social vehicle for raising money.â€
The TwitChange model has also revolutionized how much it costs charities to raise money. While the average fundraiser spends 20% of every dollar raised on administrative costs, King spent less than $50,000–or less than 6% of the money TwitChange raised–to run all three campaigns. Also, the marketing budget for TwitChange was almost nonexistent since celebrities were freely volunteering their time to endorse their individual auctions through word of mouth on social media and other outlets in hopes of raising more money than their peers.

Looking ahead, King plans to secure financial help from national advertisers so that he can hire some volunteers on a full-time basis. And he’s adding Skype for the next TwitChange campaign, which will provide winning bidders an opportunity to video chat with any of the participating celebrities.