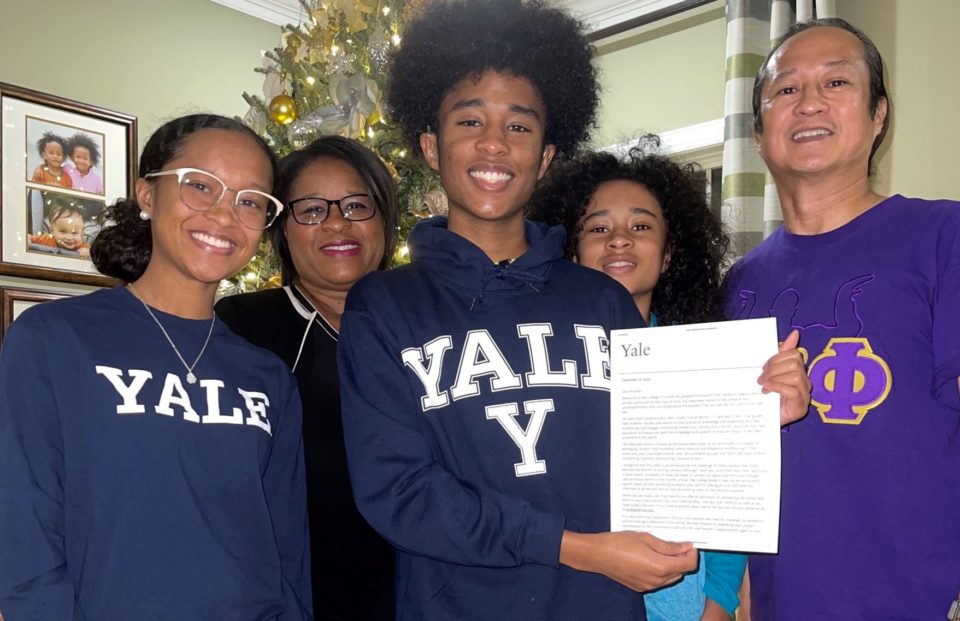 With sound parental guidance, the Razon children prepared for bright futures from an early age. Photo courtesy of the Razon family

Despite facing the unexpected stress brought about by restrictions such as remote learning and social distancing due to COVID-19, 17-year-old twins in North Carolina did not allow unprecedented times to stop them from exhibiting academic excellence. Altogether, Reagan Razon and Ricardo R. Razon IV earned more than $1.536 million in non-need, merit-based scholarship offers from six institutions of higher learning. The siblings, who attend Enloe High School, were accepted to 15 colleges that offered college acceptance or scholarships.

“We were both accepted to Harvard, Yale, Massachusetts Institute of Technology (MIT), University of Pennsylvania (UPenn), Duke, University of North Carolina (UNC), Washington University in St. Louis (WashU), and Vanderbilt, and that is a few of them. There were some schools that we applied to separately as well. Ricardo was accepted into Georgia Tech, and he received a scholarship from Rice. I was also accepted into Stanford and the University of Southern California. One of the scholarships that I was offered is the Robertson Scholarship from Duke, which is a full ride to Duke, through the Robertson Scholars leadership program that spans all four years. Both of us were selected as John B. Ervin scholars from Washington University, which is (includes) full tuition,” Reagan told BLACK ENTERPRISE.

The twins said computer science is their favorite subject. Preparation was key for Reagan and Ricardo. The twins found out the deadlines to apply for colleges and independently took the initiative and dove into the challenge.

“So as we went into senior year, we started researching schools and attending dozens and dozens of Zoom admissions sessions to figure out what schools we wanted to add to our list, and it just became a constant process of submitting applications from October, all the way until the middle of January,” Ricardo said to BLACK ENTERPRISE.

However, Ricardo and Reagan were not new to the idea of planning ahead. Both teenagers credited their parents—Ricardo Razon III and Michelleta Razon—with providing a strong academic foundation. Their father, who is of Filipino heritage, is a member of Omega Psi Phi. Michelleta graduated from the University of North Carolina at Chapel Hill. Their self-motivated children also embraced the value of confidence, and self-development, because it was instilled in them at a young age.

“I remember in kindergarten. we were practicing with our parents on car rides, doing multiplication tables my father would play us. He found this set of hip-hop songs that talked about multiplication, so I enjoyed listening to that along with my sister when we were younger, so I would say that is a source of who we are today. They made sure that we knew how to read before we walked into the school doors, when we were in kindergarten, so I’m very grateful that they did that for us,” Ricardo said to BLACK ENTERPRISE.

Additionally, Ricardo’s father mentioned that the twins took accelerated subjects and would even stay up to the wee hours completing schoolwork but rose early to get on the school bus. The twin’s parents planted the idea in them that anything is possible through hard work, determination, and being prepared with education. For instance, Reagan has even danced ballet pre-professionally for over 12 years.

Although Reagan and Ricardo keep full schedules, the students also enjoy helping others in the community, participating in activities, and engaging in advocacy work. Reagan has often been one of few Black girls in her STEM classes. She has publicly commented about education equity and the need to fight against systemic issues in schools. Her brother is the president of a local chapter of TEDx. At a previous time, Ricardo spoke about discrimination. He also was also born with moderate bilateral hearing loss. Despite needing to adapt, Ricardo excels.

The twins are grateful to have college choices. They are busy going on tours when possible, due to the pandemic. Ricardo remarked that their deadline to pick their two colleges is May 1. Reagan remarked that they both have their own journeys, and will make the right decisions, in the end.

“Both me and my brother are very grateful for the options and opportunities that we have. We know that with whatever option we do make, there is no wrong choice, because everything is amazing, and they (universities) all have their different benefits, which is something that I’m trying to remember as I’m choosing between different schools,” Reagan said to BLACK ENTERPRISE.