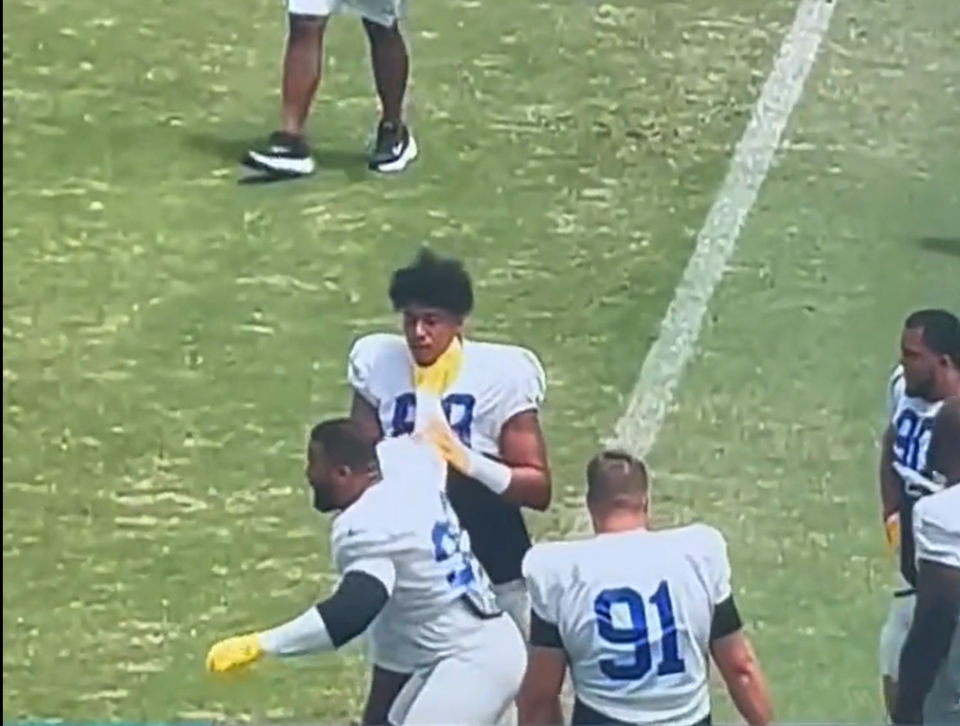 In the sports world, even in the entertainment space, teams and people have bizarre rituals as part of a routine that may have led to success in the past or may be a good warm-up leading up to the game or performance.

At times, certain acts can be viewed as unorthodox. Although it is against NFL rules to choke a player during a regular season game, a video has gone viral that shows an NFL player seemingly choking a first-year player.

Los Angeles Rams Super Bowl-winning defensive tackle Aaron Donald is seen on video grabbing the throat of his rookie teammate Elijah Garcia during a recent preseason team practice. We don’t have the benefit of audio or understanding of what is going on. Donald may be demonstrating some practice drill that the rookie can utilize during a game.

Donald has been labeled one of the greatest defensive players in the league ever since he won the NFL Defensive Rookie of the Year in 2014. Also, being a three-time NFL Defensive Player of the Year (2017, 2018, 2020), he may know a thing or two about playing defense.

As the video shows, as Garcia approaches Donald, the defensive tackle grabs his throat, and the rookie player accepts the action as fellow teammates look on. You can see Garcia’s curly locks move along with the motion when Donald is pushing his head while pushing toward Garcia.

This does not look like a fun drill for # 69 lmao pic.twitter.com/TTlGTnJ0EZ

The video of the drill went viral on Twitter as many users made comments after watching the video!

Me at practice the next day demanding a new contract https://t.co/pJmra2GsrC pic.twitter.com/pVjwY2iYuh

Dude gotta be a rookie 😂 https://t.co/wzm4yRl5aU

I know it’s donald and all but still https://t.co/dXzoJKmX2B pic.twitter.com/1aTiStp484

What kind of drill is this?!?!? https://t.co/CMcvAWpTYU