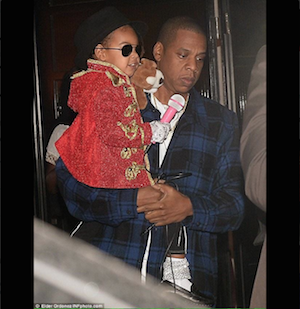 Your Halloween was just made a lot better thanks to two-and-a-half year old Blue Ivy and her precocious outfit.

No surprise for fans of the Beygency and Roc Nation, as BeyoncÃ© (as Rhythm Nation Janet Jackson) trotted out her young prodigy decked out as Michael Jackson for All Hallow’s Eve. For those wondering if it was a wreck or a success, just look at the picture to your left, as the kid works it in the iconic jacket with the glove, the sunglasses and even a little baby microphone.

The late Michael Jackson was such a motivation to BeyoncÃ© that it is no wonder that she would keep his legacy alive in her child. As the world continues to watch her every step, people are noticeably wondering just what Kanye and Kim West’s child, North, is going to be for the festive holiday. Is her time as the most cutest little bambino in the Roc-A-Fella household up? We’re not so sure, but Twitter certainly had a thing or three to say about Blue Ivy channeling the deceased King of Pop.

With that said, we are going to spotlight members of the Twitter community who had something to say about Blue Ivy and her flawlessness. Leave your own thoughts and theories in the comments section below! Enjoy and Happy Halloween!