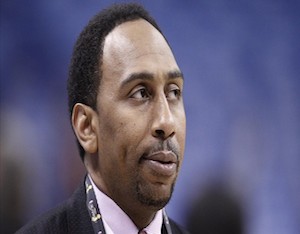 Last Friday (July 25), “First Take” and ESPN analyst Stephen A. Smith incurred the wrath of sports fans and feminists when he shared his thoughts on domestic violence.

The discussion found Smith implying that some women are actually to blame for the physical abuse they receive. His comments stemmed from a discussion on Ray Rice’sÂ two-game suspension. “Let’s make sure we don’t do anything to provoke wrong actions,” Smith said, apparently addressing women who might become victims of domestic violence.

While he repeatedly said that it is never OK for a man to put his hands on a woman, Smith lit the proverbial match that was set to burn before the night’s end. Smith’s rhetoric of “learning as much as we can about elements of provocation” didn’t go over well with feminists, abused women, and disagreeing men.

Immediately jumping into the fray was fellow ESPN host Michelle Beadle who blasted him on Twitter, saying she would “never feel clean again.” At the same time, Twitter users also posted objections to Smith’s sentiments. After making such an uproar about his comments, Smith took toÂ Twitter to explain why he was “annoyed” and made a string of explanations, which were soon deleted in favor of a single tweet.

Monday (July 28), Smith apologized for his actions as “First Take”Â began, but Twitter still had comments for the talking head. We took a look at the most flagrant comments made about Stephen A. Smith’s situation and ask you, the audience, how does this affect his (and by extension ESPN’s) brand integrity?Â Speak on it below!