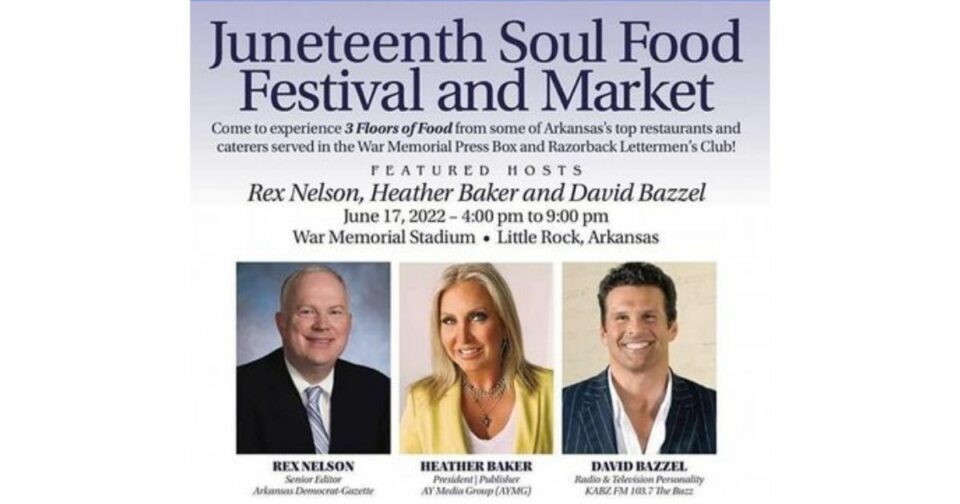 Organizers of a Juneteenth soul food festival in Arkansas pulled the event after social media erupted when a leaked advertising poster proof revealed the headlining hosts as an all-white panel, Salon reports.

A Twitter user shared the picture of the event’s poster on Tuesday and captioned the post with, “Somebody has to explain this to me.”

Somebody has to explain this to me. pic.twitter.com/osl0DDJyk4

The individuals featured are Rex Nelson, the senior editor of the Arkansas Democrat-Gazette; Heather Baker, the president and publisher of AY Media Group; and David Bazzel, an Arkansas radio and TV personality, according to Salon.

The event was scheduled for June 17 to celebrate the emancipation of enslaved people, which is usually commemorated on June 19, after they received their freedom when President Abraham Lincoln signed the 1862 Emancipation Proclamation, the New York Times reports.

President Joe Biden officially recognized the date as a federal holiday in 2021, according to NPR.

The community gathering was slated for the Little Rock War Memorial Stadium and would host “3 floors of food from some of Arkansas’ top restaurants and caterers.”

Muskie Harris, a Black former Razorback football player, was the organizer for the event immediately canceled after the backlash, according to Arkansas Times.

“I got a rope around my neck and I’m tarred and feathered over an event that’s already dead,” said Harris, a former Republican candidate for lieutenant governor.

And just like that, it is fixed/canceled.
They knew it was inappropriate with the name and all. Especially using logos without organizations approval. MTCC did not give permission to use logo or was in on planning. Checking with Urban League now. pic.twitter.com/01uRLoaT2V

Harris said the disclosed image was just a proof and not the final version.

“It just got perceived in the wrong way, and my sponsors said to leave it alone. It’s dead. It’s dried up,” he intended the event to promote unity, the Arkansas Times reports.

The Arkansas branch of The Urban League quickly made its stance public on its Facebook page. The organization declared it had no prior knowledge of the event, even though they are listed as a beneficiary on the poster.

“Please read — the Urban League of the State of Arkansas is and was not involved in any aspect of this program,” the organization posted on Tuesday. “We are concerned about the appearance of participation without our approval. It’s unfortunate that some failed to recognize the optics and the absolute need to engage prior to this being developed.”

Harris will let the dust settle and told Arkansas Time he would plan the event again for next year.