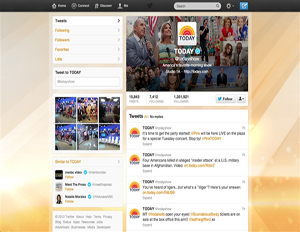 Here we go again, yet another social media network update. This time, Twitter is behind the latest change and it’s allowing you to “express yourself instantly, anywhere,â€ according to the company’s blog.

Twitter CEO Dick Costolo appeared on NBC’s Today show to unveil a new look for Twitter profiles and announce updates for its iPad, iPhone and Android apps. With many users eager to update their profiles, steadfast Twitter fans are beginning to make the change in droves. Among the first to make the profile change was @TODAYshow and its anchors @AlRoker, @MLauer and @SavannahGuthrie, as well as this morning’s guest anchor @RyanSeacrest and NBC news accounts such as @BreakingNews.

Similar to Facebook’s cover photo, profile pages on all three apps have a space for a “header image,â€ which appears above your tweets. To see a photo in full screen mode, iPad and iPhone users can simply tap the image, and swipe left and right through a Twitter account’s photo stream to view. Android users can use pinch-to-zoom technology to see thumbnail images in a Twitter page’s photo stream.

In a statement to Today, regarding the iPad app, the company says, “We’ve rebuilt it from scratch. The goal was to provide an experience similar to that of the increasingly feature-rich twitter.com, and of the Android and iPhone apps.â€

The updates to the mobile apps allow for users to maneuver the platform with ease. The iPhone and iPad apps now have the same interface, as well as many of the features already built in the iPhone app such as “Connectâ€ page for mentions, retweets and favorited tweets. In addition, iPad users can tap to see videos, photos and links in fullscreen mode.

The iPhone, iPad and Android apps are available for download at twitter.com/download.