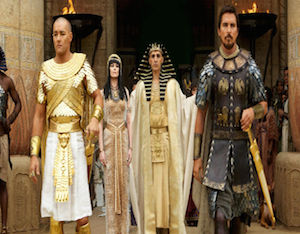 If you haven’t been paying attention to the e-streets, listen up! One of this year’s most controversial movies has been bubbling underneath the surface in the form of Ridley Scott’s biblical film, Exodus: Gods and Kings.

“[Ridley] Scott is one of those guys who’s apparently hell-bent on historical accuracy but doesn’t care enough to cast a person of color as Moses or a g–d–n African queen while simultaneously filling out the rest of the movie with black servants and thieves,” wrote author David Dennis Jr. “To make the main characters white and everyone else African is cinematic colonialism. It’s creating a piece of historical ‘art’ that carries on oppressive imagery that’s helped shackle entire countries and corners of the world.”

Doubling down to ensure that this issue isn’t glossed over is actor and activist Jesse Williams, who took to his Tumblr to keep the flame lit. In an untitled post, Williams, 33, posted a screen grab of the IMDB page for Exodus: Gods and Kings which contrasts the main and supporting casts. Below the image, he writes, “White supremacist tactics are so desperate and weak that I almost feel bad for them. But I don’t.”

Including the hashtag, #BoycottExodusMovie, Twitter picked up the charge and aimed to highlight the complaints and concerns of a populace. To help raise awareness, we urge you to check out these 10 tweets of support for Jesse Williams’ boycott of Exodus: Gods and Kings movie.