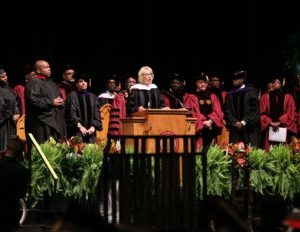 We all saw this coming.

Petitions and protests emerged the moment that it was announced that U.S. Secretary of State Betsy DeVos would be delivering the keynote address at Bethune-Cookman University’s commencement ceremony. StudentsÂ at the historically black college were outraged that DeVos, a billionaire Republican lobbyist and advocate for the privatization of schools, was chosen to speak at the HBCU–and for good reason.

Earlier this year, DeVos tried to whitewashÂ the legacy of historically black colleges and universities, claiming that they were a prime example of “school choice.”Â She also said that teachers should be allowed to bring firearms into classrooms to protect their students from grizzlyÂ bears. Plus, she hired high-level officials connected to predatory for-profitÂ schoolsÂ to work for the Department of Ed.

In an open letter released Monday, the NAACP demanded that Bethune retractÂ its invitation to DeVos, arguing that giving her a platform to speak at the school’s commencement was a slap in the face to the university’s founder, Dr. Mary McLeod Bethune.

When it comes to the future of education,Â Betsy DeVosÂ has vowed to dismantle public education in favor of privatization and charter schools, toÂ bringÂ more guns and police into our schools, has ended federal programs that encourage diversity inÂ public schoolsÂ and is in the process of developing a student loan repayment planÂ that would make it harder forÂ 97 percentÂ of the current student body of Bethune-Cookman University, and millions of students across the country, to pay back their loans.Â Betsy DeVos referred to HBCUs asÂ “pioneers of school choice,â€ a sign of how tone deaf she is to the history and needs of Black communities. This weekend, Trump announced that a program that helps ensure equitable financing to HBCUs “may be unconstitutional.â€

Still, the college president, Edison O. Jackson, decided to proceed anyway. And, this is what happened in return.

In addition to graduates heckling and turning their backs on DeVos, the hashtag #BackstoDeVos began trending on Twitter. Here are a few of the best reactions.

This display of public outrage should serve as a wake-up call to DeVos and the Trump administration: It’s going to take a lot more thanÂ photo ops and empty speeches to win over black students. Black institutions deserve protection, more federal funding, and better public schools that prepare students of color for college. Anything less is unacceptable.