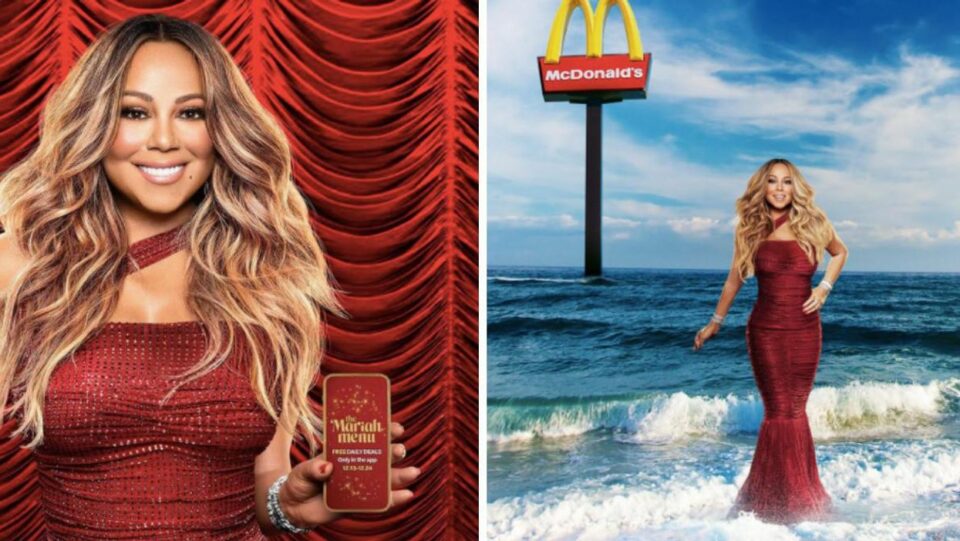 The “Mariah Menu” is coming to McDonald’s just in time for Mariah Carey’s favorite holiday, Christmas. But the company’s under-the-sea-inspired Twitter announcement on the new partnership sent many for a loop.

“Mariah’s back for the holiday season and this time, she’s bringing a whole menu with her,” the company tweeted on Wednesday. The only issue is, nothing about the promotional photo included in the tweet screamed Christmas.

Mariah’s back for the holiday season and this time, she’s bringing a whole menu with her pic.twitter.com/loeeSfe6k2

McDonald’s and Mariah’s new partnership includes “12 days of free food” where customers using the app can get one free item from the “Mariah Menu” after spending at least $1 at the popular fast-food chain, USA Today reports.

A YouTube announcement shows Mariah explaining the holiday deal that kicks off on Dec. 13 and continues through Christmas Eve.

While the video explains it clearly, McDonald’s Twitter announcement didn’t get the same level of understanding. Though Mariah is wearing the same red sequined holiday dress in the Twitter photo, the oceanic backdrop is giving more Little Mermaid vibes than “All I Want for Christmas Is You.”

Among the onslaught of comical responses, Twitter users wanted to know “Why is Mariah Carey emerging from the ocean?” One user responded with a video of Mariah swimming with dolphins that assumed the confusing ad was a reminder that Mariah can talk to animals.

that clapback or probably this too because she can communicate with sea creatures pic.twitter.com/2gMhvznhL2

“Did they blow the entire budget for this venture on getting Mariah her coin because whoever is doing the graphics needs to be stopped SkullFace with tears of joy,” one person said.

“What in the climate change is happening here,” added someone else. Another wondered if the new partnership was a “climate change special.”

what in the climate change is happening here https://t.co/yaK7TDrsQo

Is this the climate change special?
Why is she hanging out at a McDonald's that just got swallowed up by the ocean? https://t.co/kkwenl3xIy

Who better to promote their holiday menu than the Queen of Christmas, Mariah Carey?