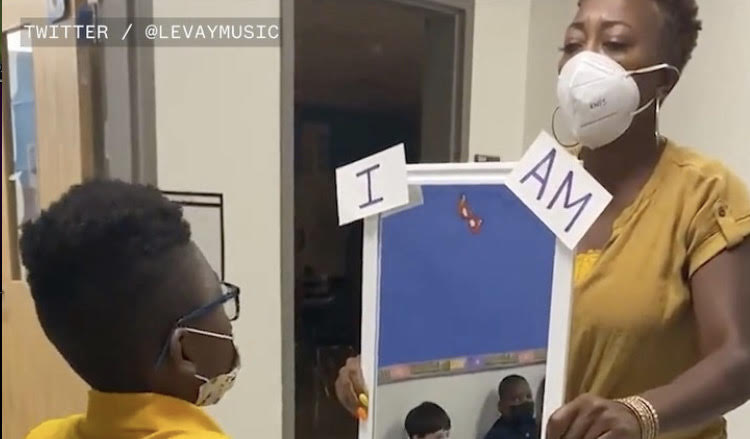 Two teachers in Atlanta recently went viral for helping their students see their inner power. In the video, their fourth grade students were seen shouting positive affirmations into a mirror while their teachers cheered them on.

Neffiteria Acker, the teacher seen holding the mirror in the video, said the idea came from an exercise she does with her daughter.

“The idea came from a practice that I do with myself and my 5-year-old daughter,” Acker told TODAY Parents. “When we’re on our way to school, I have her repeat affirmations to me, starting with, ‘I am.’ Usually I just ask her to tell me something good about herself. She’ll say, ‘I’m a fast eater,’ or, ‘I’m a fast runner.’ Then I’ll add to it: ‘You’re also really brave. So why don’t you say, “I’m brave.”‘

“It boosts her confidence,” Acker continued, “It boosts my confidence as a woman and a mother. So I figured, why not add that into the classroom?”

While Acker held the mirror, the student’s other teacher, Cierra Levay Broadway, captured the moment.

“It was a really great moment,” she told TODAY. “I really got chills when I saw the kids and heard what they were saying for their affirmations. For a lot of them, it was their first time ever doing that.”

Both teachers feel it’s important to build self-confidence at a young age.

“We get seeds planted in our minds and in our spirits every day and we don’t realize how we’re watering those seeds, and a lot of it is negative,” Acker said. “So planting a seed of self-love is the best seed to plant, and all me and Cierra have to do is water it.”

For students in their classroom who face challenging circumstances, planting positive seeds is especially important.

“We teach in a pretty rough neighborhood in Atlanta, and a lot of those kids don’t hear that at all,” Broadway said. “They hear a lot of negativity about themselves…It’s good to plant those seeds here.”

The care the teachers provide extends beyond the classroom.

“Some of these kids never leave the neighborhood,” Broadway said. “We’ve both taken it upon ourselves to get to know the kids, build relationships and take them places, like the Atlanta Botanical Gardens. I take some of them to the pool sometimes. One of them, from our first year here, he actually lived with me for about six months. I kind of unofficially adopted him. It’s not just teaching them how to read and how to do math.”

The students are excited about their newfound social media presence.

“They love it! This is the social media era,” Acker said. “I had some students even from the fifth grade say, ‘I saw you on TikTok!’ It makes them feel proud, too—somewhat famous as well. It’s their school, their teacher on the internet. It makes them feel good.”